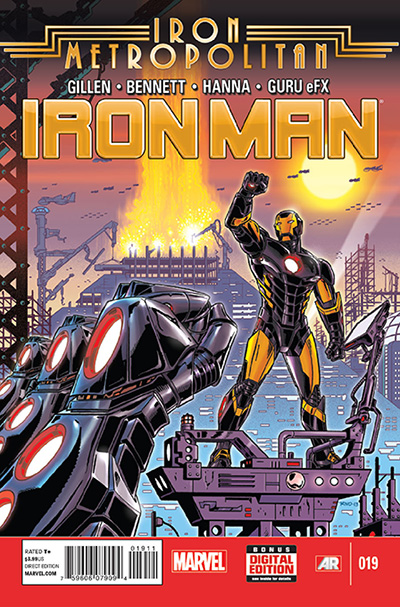 The Iron Metropolitan arc comes off the heels of The Secret Origins fallout and deals with how Tony now copes with finding out he has a brother and that he is not truly a Stark. But instead of falling into his old alcoholic and destructive patterns, Tony and new found brother, Arno, are on a mission to build a new city. They have decided on Mandarin City off the coast of China, formerly run by the Mandarin through the use of mind control. Before they can start rebuilding, they have a few remaining Triad thugs wielding surplus Mandarin tech to clear out. These past two issues have made it abundantly clear that, while Gillen is building upon Fraction’s run by incorporating Iron Man’s most well known villain, he’s doing it it a different way than one may expect. While I was never much of a fan of the eccentricities of the original Mandarin, I’m not quite sure how I feel yet about this new ring-wielding Mandarin corps.

A funnier highlight in this issue is the first meeting between Pepper Potts and Tony’s latest suit AI, P.E.P.P.E.R. Pepper responds about as well as you’d expect to the idea of a digital copy of herself, but she and the AI seem to hit it off as Tony promises to get rid of her. In an undisclosed location, Tony renames the AI, H.E.L.E.N., and promotes her to running the vastly superior, “Troy,” in the form of not his armor’s AI, but what could be helping control the creation of his new city.

Kieron Gillen’s run on this title has been hit or miss for me. I couldn’t get into the first few issues cause of the art, not naming names, but what Gillen does do well in this issue is recap what has taken place before, including the most important parts of the last story-arc, which I felt dragged on a bit. The great thing being that despite the fact this is the second issue in the Iron Metropolitan arc, it is a surprisingly good jumping on point for new readers. All in all, I thought this issue was a lot of fun to read and was surprised that it beat out a few other titles for me.