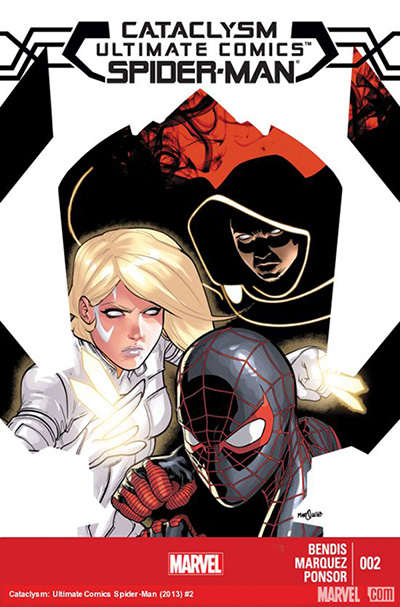 I was initially sad when I heard the news that Ultimate Comics Spider-Man was coming to an end. Whether or not Miles entering the 616 Universe is a good thing has yet to be seen, but the current run has been one of my favorites every month since the very first issue. C:UCSM is essentially the same title, but renumbered for the big event, so we’re still getting the same great writing and supporting cast that Bendis hooked fans with. If you loved Ultimate Spider-Man, then this is a must read.

In this issue, there are flashbacks two years back to Ultimatum, where Magneto caused a tidal wave to sink New York City. We see these characters before they were heroes, during an event that forever changed the Ultimate Universe. Tandy Bowen (Dagger) and her mom were on the run from the destruction. Tandy wanted to stay and help people, but her mom, an anti-mutant bigot, said they needed to help themselves first and foremost. In the present day, once again in the face of adversity, she decides her duty is to help people. Miles flashes back to when he and his parents were stuck in gridlocked traffic, trying to flee the city. His dad has a mini freak out and starts ranting anti-mutant sentiments. Back to the current time, Miles leaves the rest of the city to the responding heroes as he takes off to save his father.

I hate having to wait a full month to see the resolution and what will happen next. The story has been building a long time towards the confrontation between Miles and his father, but I can’t help but wonder if Bendis planned for this to happen during Cataclysm. Being a key source of story for the two characters, I don’t see him having the idea to rush one of Miles’ biggest defining moments in the middle of a big event. Regardless of the reasoning, I am excited to see what comes of it and no doubt, have faith that Bendis is the one who can pull it off. Marquez’s art has been an amazing accompaniment to Bendis’ character development. His action sequences and facial expressions capture every nuance of emotion. Of course, Ponsor’s colors breathe life into the subtly redesigned characters in this universe and really make the scenes pop. This is by far one of my favorite current creative teams!