Review: Guardians of the Galaxy #10 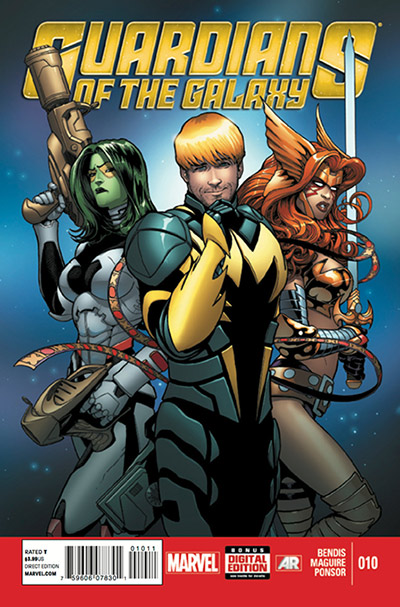 When Guardians started, it showed promise with a plot involving Star-Lord and his father, the King of Spartax. It seemed to go a little off topic with the addition of Angela and became less recognizable during the Infinity tie-ins. Now that Infinity is over, it is unclear what the new direction will be, and this issue certainly does little in the way of plot development in an overall arc. All this to say, this issue is a lot of fun.

This issue essentially serves as a display of Angela and Gamora’s badassery. This was the first issue where I felt like Angela fit in as a part of the team. She shows how adept to fighting she is in a demonstration of speed as she effortlessly moves around the Badoon commander, giving the command to fire, before he even finishes his sentence. The back and forth conversation between the two females on the team didn’t seem forced and was a lot of fun amongst the scenes of heads being chopped off, impalement, and gunfire. This book is right back to being one of my favorites due to sheer enjoyment.

The artwork from Kevin Maguire is fantastic. His dynamic art style adds as much personality as Pichelli’s art in previous issues. His action sequences are expertly choreographed and this issue is full of great action, from the beginning of Gamora and Anglela jumping into battle. The facial expressions he captures really add a spark to each character’s personality. It really helps tell the story without needing to be spelled out by the writer. This issue really showcases his talents and lays to rest any concern that he can hang with the big name artists that have come before him. Even considering the great writing that Bendis has been doing on his other X-titles, but it would be remiss to say that this may be the best series he’s writing. Once the action starts, Bendis really pulls back the dialogue to let Maguire do his thing. When we do get dialogue, the quips aren’t overdone and feels to the point. I’m loving wherever this book is taking us.