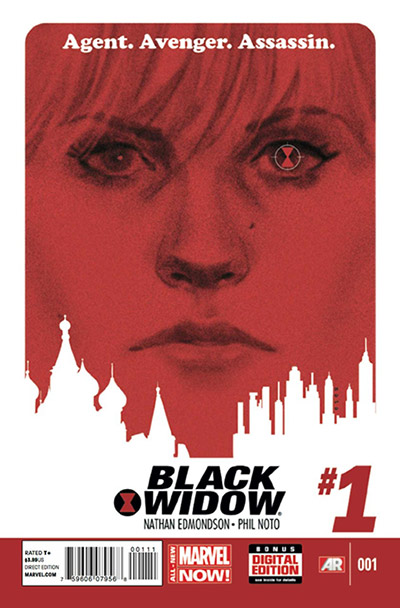 Marvel has been known for placing emphasis on team books, their best known being from various Avengers and X-Men titles. Their newly tried solo books haven’t had the best track record and many have suffered the fate of being cancelled, until Hawkeye came along. The creative team of Matt Fraction and David Aja managed to make an unlikely critically acclaimed hit from one of Marvel’s 2nd string characters. There is a specific reason why Hawkeye’s book is so successful. It wasn’t the kind of superhero book were any other hero could be in his shoes. Aja created an art style that is unique and Fraction tells stories that are far from Marvel’s typical hero archetype. Following this formula, the challenge is for Marvel to create books that are true to their characters’ personalities, as well as being interesting enough to lead their own solo books.

The first issue of Black Widow, by Nathan Edmondson and Phil Noto, stars Natalia Romanova/Natasha Romonoff/Natalie Rushman/etc. This book does a great job introducing new readers and bringing in long time fans into her solo adventures infusing plenty of espionage, manipulation, moral gray area, and tons of action. Noto is an artist that is really hit or miss for me, and I found this issue was a bit back and forth for me, but it wasn’t so much that I couldn’t finish the book either. The art, for me, was bold enough to take this character in her own fun direction.

The running theme seems to be Natasha’s personal penance for the “red in her ledger.” She seems knowingly trapped in an unending cycle of an unattainable redemption, and that is her own personal hell that she has created for herself. “How many more jobs…how long will it take?” All in all, this issue was fun and unlike the other attempts for a Widow solo title, this one has potential. But even as this issue feels familiar, ending with Widow her own version of Pizza Dog, I’m willing to finish the first arc before I make my decision to keep this book on my pulls.