Here there be dragons … but never on this scale! 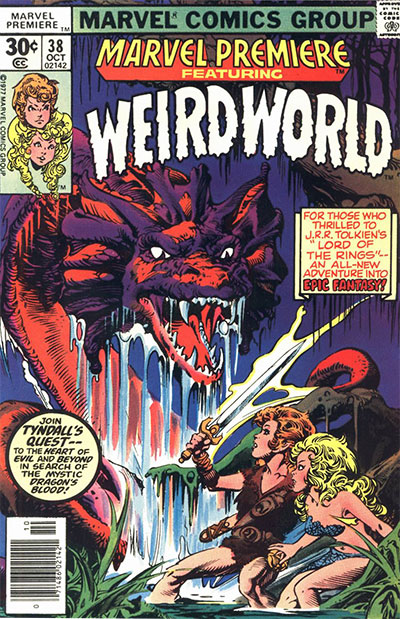 In 1974, Gary Gygax and Dave Arneson introduced us to a fantastic realm of dragons, magic, adventure and nearly everything else the imagination could fathom. While Dungeons & Dragons wasn’t the first invention of a table-top role-playing game (RPG), it became the most successful, as well as the predominant representation of RPGs in both the gaming community and in pop culture. This popular game sparked an interest in all things fantasy-related, not the least of which was J.R.R. Tolkien’s “The Lord of the Rings” and “The Hobbit” books (all published prior to 1955). What these works had in common was their world setting – medieval kingdoms and vast unexplored territories, and their heroes – knights, dwarves, elves and other adventurers who left simple lives behind to seek glory, treasure and evil forces which must be defeated. In 1977, Marvel Comics dipped their toes into this realm of fantasy (separate from the fantasy stories they’d told before, such as Conan the Barbarian) by creating Weirdworld.

The first appearance of Weirdworld came in the pages of Marvel Super Action #1, one of their black-and-white magazinea, which were vehicles by which Marvel could tell non-canon stories of various Marvel Universe heroes along with other tales outside the Comics Code Authority’s realm of enforcement. Doug Moench developed the plot and Mike Ploog created the art, and both co-creators crafted a story which gained enough popularity that it was revisited in Marvel Premiere #38, and a subsequent story in Marvel Comics Super Special issues 11-13. Ploog had parted ways with Marvel for the Super Special and the later Epic Illustrated stories, but returned for part one of a Weirdworld trilogy in Marvel Fanfare #24 (1986). In this world, we see a departure from the way elves, dwarves and other fantasy archetypes were presented in D&D and The Lord of the Rings. Instead of tall, long-lived, wise armies of elite warriors, elves became small and childlike in appearance, and dwarves were equally different from how Gygax and Tolkien envisioned – although remarkably alike Tolkien’s hobbits and Gygax’s halflings. Despite the character differences, whether the story itself captures the feel of its definitive fantasy counterparts is something for us to decide.

As we begin “The Lord of Tyndall’s Quest”, we see a diminutive fellow wielding a gleaming sword and spying a great leviathan skeleton in the midst of a small core of light encircled by crushing shadow. His destination is clear and his mission – to destroy the Heart of Evil* – seems ready to reach its climactic end. Approaching the decrepit skeleton, he sees a bright egg within, but before he can bring his sword to bear, the egg shatters and naked girl – “with pointed ears…just like me…!” hatches. Introductions are made: he is Tyndall of Klarn and she is Valanna, also of Klarn, who has no memory of who she is or why she was inside the egg. Tyndall surmises that the dwarves sent him on this mission to slay her – their “Heart of Evil” – the only other one of his kind, while she slept. He now believes that the dwarf residents of Weirdworld hate him because he is different from them, and now he must protect the only other one like him lest he find himself alone once again.

Fashioning makeshift clothes out of spiderwebs, Valanna accompanies Tyndall and seems to know exactly where to go, despite lacking any memory of her past. The two forge ahead through the darkness … through the Region of Shadow … and trudge into a swamp. Suddenly, a hideous swamp serpent rises from the water and coils around Valanna, hungry for warm flesh. Tyndall leaps into action, furiously grabbing the end of the serpent’s tail and tying it around a tree stump. He then races toward Valanna, sword drawn and stabs it with all his might into the beast’s hide, forcing it to release her and chase after him! He runs with all furious haste, leading it away from Valanna. Just when the swamp serpent’s jaws are about to close upon him, the length of the creature’s body extends and it comes to a sudden halt as the tree trunk holds it from reaching any further. Shortly thereafter, they find their way into the light and escape the Region of Shadow. All of this happens under the observation from someone far away, peering at them through a magic looking glass.

The wizard Grithstane spies the two youths, desiring them for his own purposes. He prepares and executes a series of rituals and incantations which produce a half-dozen mindless lackeys out of wax. They are given a single directive: to capture these young adventurers … alive! Once they succeed and apprehend their prey, the minions carry Tyndall and Valanna back to a wicked abode within the Region of Shadow. The grizzled, old wizard charges Tyndall with a quest, and his refusal will result in the death of Valanna. Reluctantly, Tyndall agrees to this quest: slay an immortal dragon and collect its blood, which Grithstane will use to magically regain his youth. When he questions where to find an immortal dragon, Grithstane points to the sky. A large land mass hangs in the air, defying gravity and the laws of nature. It turns out that this floating disk is what creates the Region of Shadow, blocking out the sun except for a hole in the middle which allows light to shine down through its core. One magic spell later, and a hunk of ground underneath Tyndall erupts and carries him skyward at incredible speed, smashing into the bottom of the floating island and up through the soil to its surface. 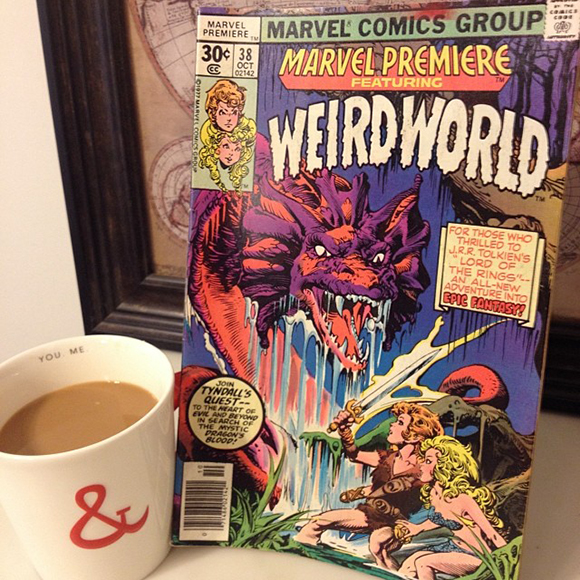 He finds himself in a strange land and comes upon a ceremony performed by a dozen troll-like savages the same size as Tyndall. They are irritated that someone has dared to interrupt their sacred ritual, and Tyndall is perplexed when he learns that this land is Klarn. If this is Klarn, the land from which he and Valanna come from, then why don’t these people look like him? Suddenly, he notices someone who DOES look like him, a beautiful, ebony-haired girl with pointy ears who is tied to a tree. These worshipers are going to sacrifice her to the dragon god, which doesn’t sit well with Tyndall at all. “Over my broken sword!”, he boasts, and fights off the savages, blade-to-blade, as they desperately try and keep him from freeing “yon changer”. In the midst of the fight, however, they flee in terror as earthshaking crashing sounds draw nearer. Tyndall cuts the female’s bindings loose and attempts to escort her to safety from whatever horror is approaching. Without warning, she transforms into a vicious swamp serpent and he learns why the savages called her “changer”.

The climactic end of this tale comes when the savages’ dragon god strikes, attacking the swamp serpent in a battle of titans. Fangs are bared, flame is expelled and the dragon ends the confrontation with the swamp serpent in its mouth. As it’s preparing to feed, however, Tyndall steels his resolve – recalling how Valanna’s life is at stake – and leaps from a hanging precipice with sword in hand, striking at the dragon’s head with all of his might! Collecting the blood, he can now free Valanna from the wizard, but when he returns to the surface, she is already free. Another changer became a swamp serpent within Grithstane’s lair and ate him whole! Now, the two young lovers leave behind the wizard’s hideout, the entire Region of Shadow, and forge their way toward new adventures … together. In addition to the aforementioned Weirdworld stories, Marvel also published further adventures of elflike characters in a fantasy realm in 1985 with Wendy and Richard Pini’s Elfquest (which they started in 1978). You can also find more fantasy work, including sword and sorcery-type stories, within the pages of Marvel’s black-and-white magazines, such as Marvel Premier Presents, Bizarre Adventures and Epic Illustrated. This is an incredibly well-crafted comic and it definitely sparked my interest in reading the stories preceding and succeeding it. I mean, just look at that cover! The art of storytelling in a single image is self-evident, and the inside is just as masterfully done. I highly recommend this little treasure, true believers, and hope you find many more like it! Fare Thee Well!

* Assigned by the Dwarf-Elders of Weirdworld, Marvel Super Action #1

Marvel Premiere Vol. 1 #38 is written by Doug Moench, penciled by Mike Ploog, inked by Alex Niño, colored by Glynis Wein, lettered by Joe Rosen and edited by Archie Goodwin, with a cover by Dave Cockrum and Rudy Nebres.