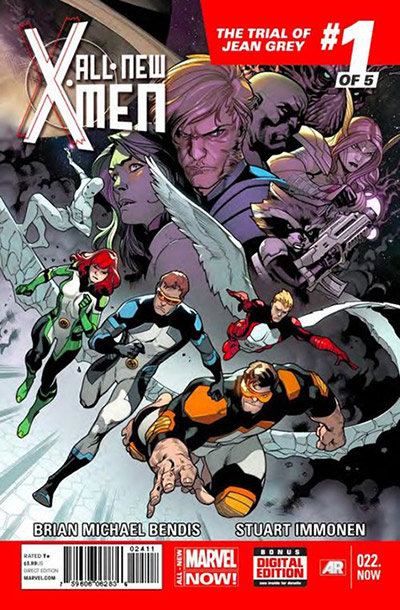 This issue begins with poor Angel being stuck in the middle of the most uncomfortable lunch between Scott and Jean. A young Jean Grey has had a lot to deal with, besides the fact of being ripped out of their timeline with no way back. She had the hard revelation that her destiny is to die at a young age after being possessed by a cosmic power and destroying multiple worlds. Like most teenagers, she avoids the problem and Scott tries to come to her rescue. Meanwhile, Iceman is along the perimeter making snow angels when the school comes under attack by the Shi’ar. The X-Men try to fight off the attack, but the Shi’ar are able to easily capture Jean Grey and are off as fast as they arrived.

Bendis has been doing a great job writing believably in the voice of teenagers. You understand why Jean would be acting like a pouty teen after she finds out her friends’ fates are in her hands, along with multiple universes. You understand that young Scott is a bit of a goody-two-shoes and why someone like Logan would want to pick on him. It’s just like normal melodramatic teenage interactions, but with super powers. While the teenagers’ behavior can be a bit annoying at times, this is what makes this a great and believable book. Stuart Immonen is back on art duties, which is a great thing after a much deserved break from Battle of the Atom. It seemed like he was a bit rushed during that arc, but now he is back and just as impressive as when he started this book. He talents shine in the action sequences and in the emotions he’s able to show in each character. I can’t wait to see his beautiful work alongside Sara Pichelli during the crossover with Guardians.

You can see what direction the arc is going based on the title and the fact the crossover with Guardians has been much hyped. All New X-Men has been marketed as a good jumping on point for new readers and it does a great job of it. I’m personally excited at the idea of both Immonen and Pichelli drawing X-23. With all the event fatigue that’s been going around, I’m thinking this is a story I’ll actually be able to keep up with.