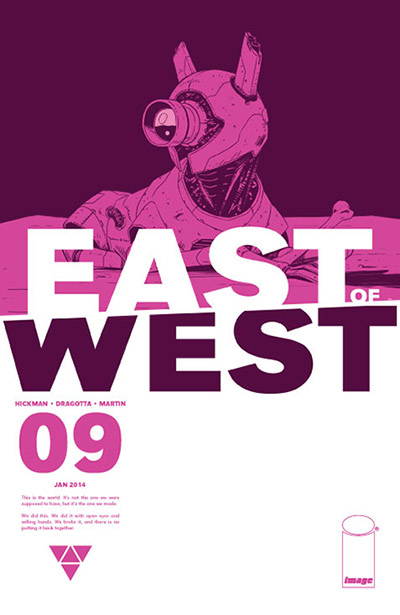 The first volume of East of West (1-6) focused on world building and the latest issues have focused more on setting up who the key players are. Hickman tells his story without cramming too much plot into each issue and really takes his time. At times this can call for patience, which is risky in a world of short attention spans with content at the tips of one’s fingers. This book makes it’s own rules and doesn’t resemble any typical comic book. This issue further expands its world and adds more characters to its global conflict.

We’re introduced to John Freeman, prince of a division of America in which slaves grew to become rich and prosperous, who is an interesting, formidable rogue within a vast hierarchy of prospective leaders. He quickly establishes his dominance and it’s shown how he easily dispatches one of his brothers who was vying for his spot at the throne. Elsewhere, Death’s encounter with the Oracle is a disturbing one. In her dealings with Death, she explains possible outcomes, and her snake-like features make the ultimate “exchange” that is desired with Death. This, along with the King’s warning of inevitable war, builds suspense to things coming to a head.

The creative team of Hickman, and Dragotta deliver on fronts to make the world of this story as interesting as possible. Dragotta is able to make some of the action and the dialogue between characters work and is also very good at conveying emotions, presenting them flawlessly and showing a rather impressive range through minimal changes from panel to panel, without getting exuberant or too subtle for the characters to be expressive.