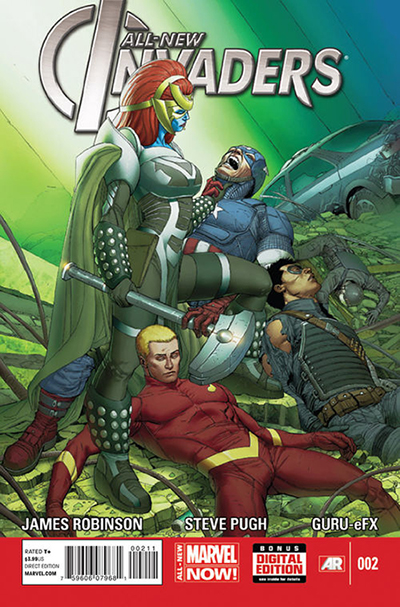 Marvel has this to say about All-New Invaders #2 from James Robinson and Steve Pugh.

The theatre of war finds a strange new audience in your first look at ALL-NEW INVADERS #2, from the superstar creative team of James Robinson (STARMAN, EARTH 2) and Steve Pugh (ANIMAL MAN, GEN-X). As CAPTAIN AMERICA and THE INVADERS enter the cosmos in pursuit of intergalactic war criminals, the original HUMAN TORCH ignites once more! But the reunion may be short lived, as the Kree Empire unleashes the indomitable, the unbeatable, and the unstoppable TANALTH THE PURSUER on THE INVADERS. And with NAMOR trapped behind enemy lines, has the battlefield suddenly become a hunting ground? The unique re-teaming of history’s greatest heroes takes a savage turn this February in ALL-NEW INVADERS #2!

Now on with the review

The premiere issue of this series focused entirely on Human Torch, but this time, the story shifts to Winter Soldier and Captain America as they come to the aid of their flaming buddy. The Sub-Mariner remains absent, which happens to be a key plot point, but the trio have come together to fight a Kree warrior seeking a long-lost but powerful artifact.

It’s a fun read, but this Winter Soldier is more like Cap’s old sidekick, Bucky, than the hardened soldier that he’s become over the years. The back and forth with Cap seems a little too in conflict with the newer, darker nature of the character, and he spends an awful lot of time out in the open for someone who’s supposed to be “dead.” The story isn’t a exactly anything new, so there’s no reason to bury us in details. Bad guys want a bad machine to do bad things, and the good guys must do their thing. James Robinson and Steve Pugh manage to make an entertaining comic book, even if it’s not exactly required reading. Plus, the Invaders actually gear up to do some invading, so at least they are committing to the name.