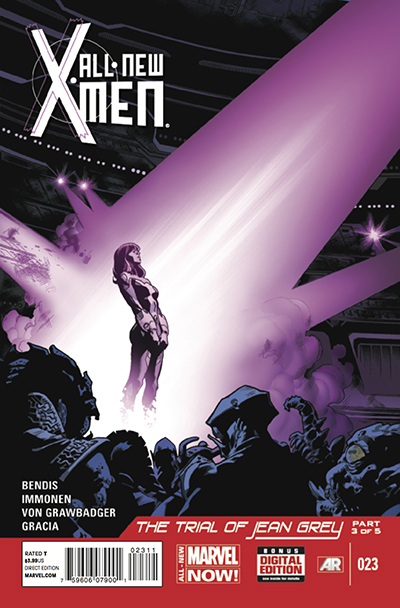 Despite Jean Grey’s name being in the title of the arc, this issue shows that the story will be about more than just Jean Grey being put on “trial” for crimes she hasn’t committed yet. Most of this issue takes place aboard the Guardians’ ship, with the All-New X-Men on their first trip to space and encountering aliens. I found myself laughing a lot at Bobby and Rocket and also hoping we got a glimpse of a possible X, Gamora, and Angela butt kicking team up. Outside of the Guardians’ ship, we are given our first glimpse at Jean Grey’s imprisonment and her first encounters with Gladiator and Oracle of the Shi’ar. Both of these encounters serve to demonstrate that the biggest problem with this “trial” is that is that the Shi’ar are solely concerned with the sentencing and punishment. Emotionally, the story hits all the right beats. Jean has always been at the heart of this book’s conflicts, and this current storyline continues that thread.

Stuart Immonen does an amazing job pencilling the Guardians of the Galaxy and easily makes the team fit his own style. He sticks very close to the characters’ already established designs, but manages to adapt them into his slightly more cartoony style. Thankfully the Guardians series is characterized by daring space adventure, not dependent on gritty realistic visuals, and appear natural under Immonen’s pencil. The panels where the Guardians and X-Men are being tossed around the ship are full of impressive expressions and details, especially considering there are a dozen characters on the page. Every character has their own physique and posture, no matter how small they have to be to fit into a panel with so many co-stars. Details fill the backgrounds and space scenes but the absence of any detail is equally impactful, such as during Jean’s plummet into solitary.

Without spoiling anything, new readers will likely be confused by the twist at the end, and long time X-readers will likely be pleased by the return of familiar face. Even if this creates a confusing mess of mutant history, it at least proves that Brian Michael Bendis is not holding back in his exploration of the mutant universe. After two issues that essentially told the same story, this issue is a welcomed catalyst to the arc, and will surely keep readers intrigued.