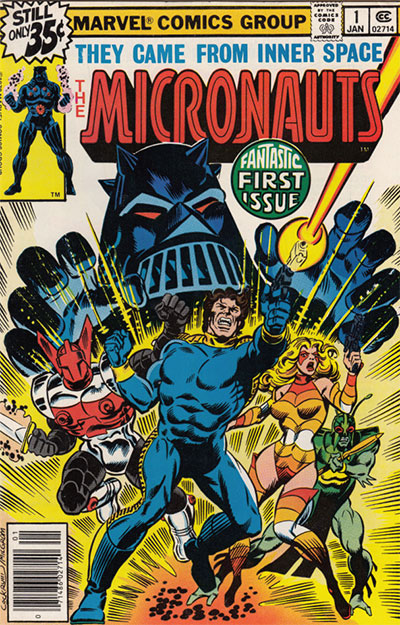 You can only experience something ONCE for the first time. Whether it’s Star Wars, a Tolkien novel or a first kiss, you can never go back and re-experience that “first”. Comics are no different. While I have been enjoying the works of Bill Mantlo for 30+ years, I had never read a single issue of Micronauts. One of the things that made Boisterous Bill so special was his desire and talent for telling stories outside Marvel’s super-hero continuity. Sure, he was compelled to bring in the occasional cross-over with the X-men, Fantastic Four and other franchise properties, but the worlds of Rom, Micronauts and Swords of the Swashbucklers existed without being hog-tied to Marvel’s complex history.

In 1977, Mantlo’s young son, Adam, opened a present on Christmas Day and was surprised to see a package of bizarre action figures. He had no idea what they were, but they were a tabula rasa for the vivid imagination of a four year-old. The Mego Corporation saw fit to give these toys form, colors and names, but nothing in the way of backstory or identity. In a later interview, Mantlo recalled “They were unlike any toys I had ever seen – and I’ve run the gamut in my time, from Dodge City to G.I. Joe to the Shogun Warriors. I asked Adam if I could see them before they went the way of all plastic and, when he handed them to me, I held in my palm the four basic figures of a new concept in toys called…The Micronauts. I envisioned them as small, microscopic even, inhabiting an other-verse apart from, but conjunctive with ours.”

One look at these strange figures inspired Bill to write not only their adventures, but to create a whole universe and mythology around them. Convincing Jim Shooter, then Marvel’s editor-in-chief, to acquire the comics license for these toys, Bill and artist Michael Golden created the book that went on to win the 1979 Eagle Award for Favorite New Comic Title (all this while he was writing up to eight separate monthly titles). At first, the premier issue had trouble getting off the ground. Stan Lee and Jim Shooter complained forcefully: “What did you do? We can’t understand this!” Mantlo and Golden had attempted to saturate the first issue with so much story that it all felt hyper-convoluted.

The premise is this: 1,000 years after leaving “Homeworld” to explore the stars, Commander Arcturus Rann returns home to find that his former mentor, Baron Karza, has taken over the world by coercion, with the promise of immortality for the entire populace. Rann is immediately captured, imprisoned and placed in an arena to die before the entertained masses. He must escape from his hazardous situation with the help of a renegade princess (Marionette), alien warrior (Bug) and Acroyear (prince of Acroyears). With the help of their automaton allies, Biotron and Microtron, along with an ethereal enigma known only as Time Traveler, they retake Rann’s space vessel and run for their lives. 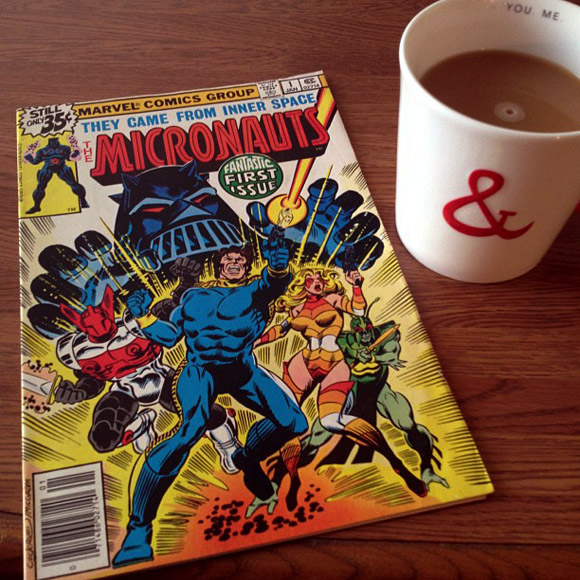 There are fights with robots, horse chases, space battles, body banks, sub-molecular solar systems, warp drives and more shadow priests, acroyears and dog soldiers that one can reasonably count. Is there any wonder the first draft earned criticism from Shooter such as “If we can’t understand it, how to you expect the kids to understand it?” Once things got off the ground, however, the readers were hooked and the praise was immediate. Kurt Busiek compared the originality and ingeniousness of Micronauts to the work of Jack Kirby. But that was well into the series, long after issue #1 hit the shelves in 1978 (for “Still Only 35¢”).

The first time I read ROM Spaceknight, I was addicted to the wonder and grandeur of all 75 issues. I know that I can go back and read them any time, but there will never be another first reading. Now that I have begun Micronauts, I plan to savor every panel, page and issue so that I can prolong the enjoyment as long as possible. Issue #2, here I come. Until next week, true believers, fare thee well!

Michael Golden is known for his pencils on Micronauts, The ‘Nam and Bucky O’Hare (your author strongly recommends his work on Ocean from Wildstorm). He will be making an appearance at C2E2 this year, which takes place April 26-28 in Chicago (where I plan to meet him in person). More information on Michael Golden can be found at www.evainkpublishing.com.

Bill Mantlo resides in a New England nursing facility where he receives 24-hour care due to a profound brain injury he suffered from a hit-and-run driver while rollerblading in 1992. His writing spans 500+ issues over 15 years and can be found in almost Marvel title from the 70’s and 80’s. Any concerns for Bill Mantlo’s healthcare costs may generally be addressed with donations to Hero Initiative.