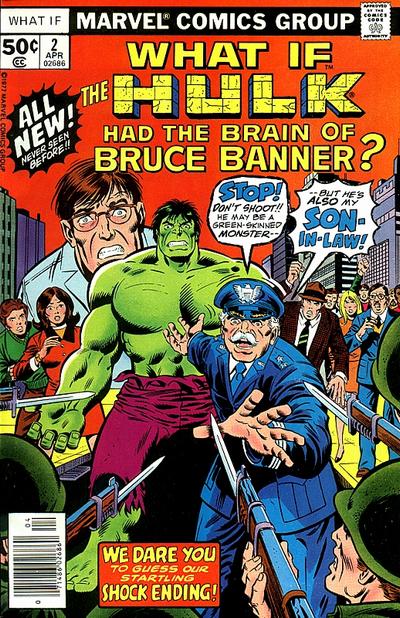 What if Hulk was one of us? Just a slob like one of us?

I don’t know about you, true believers, but I find myself pondering the stories of our favorite Marvel heroes and wondering about the events unseen by readers’ eyes. What heroism might Luke Cage be hired to do between issues? What muggings might Spider-Man be foiling before we see him on page one? What board meetings might Tony Stark be attending over at Stark Industries? While the untold activities of our favorite costumed characters may be limitless, we have been blessed to benefit from the spectacular stories which inhabit the alternate time continuum which exists alongside our own, separated from it by the merest, thinnest reality! These are the stories of What If?, where the enigmatic entity known as Uatu the Watcher shares the lives of Marvel’s heroes and villains in worlds where events transpire slightly differently than those we know. Such questions have been explored as “What If The Phoenix Had Not Died?” (Vol. 1 #27), “What If Elektra Had Lived?” (Vol. 1 #35) and “What If The Amazing Spider-Man Had NOT Married Mary Jane and HAD Married the Black Cat?” (Vol. 2 #20-21). In the world we know and cherish, mild-mannered scientist Bruce Banner saved reckless youth Rick Jones from an exploding gamma bomb, only to be exposed to the gamma rays himself and transform into the raging behemoth we know as The Incredible Hulk. The Watcher dares us to consider the most simple of changes to this story, and how things might have been different if Banner had retained his own intellect when he was turned into the Hulk.

In the 1970s, readers and television viewers were accustomed to a Hulk with a relatively low IQ, limited vocabulary and severe anger issues. Presenting them with a smart Hulk was a radical departure from the norm, and so this tale turned a great deal of heads. Not only would the change of Banner’s situation prove to alter his fate, but that of the entire Marvel Universe, as well! In this look at history gone awry, the mind of Bruce Banner remains ascendant when he first transforms into a super-strong, green-skinned brute. No other events happen which cause this change in his backstory; it just happens. What also manifests itself are the circumstances which cause him to be named “Hulk”, first of all an Army jeep crashing into him and the driver stating “Good gravy! We hit some kind of huge, green HULK! And it’s ALIVE!”. Coincidentally, everybody else starts calling him that, too, even though he remains just a super-powered Bruce Banner.

During the same night as his initial transformation, Banner encounters the gruesome Gargoyle, chief scientist of the USSR. Once he resists the Gargoyle’s mind-control powers (thanks to his own intellect), he insists on befriending the “infamous ‘red’ scientist”, despite the doubts of his companions Rick Jones and Betty Ross. As the Gargoyle learns that the green-skinned monstrosity he came to enslave is really the “famous American scientist” Bruce Banner, the two come to an accord and the Gargoyle returns to his own land, eager to now work for peace instead of conquest. I’m certain that this eventually led to a fall of communism much sooner than in our world. As morning comes, he turns back into human form, but when he changes back into the Hulk the next night, General Thunderbolt Ross must accept that the man he’s always berated as weak is now as strong as his whole army and wants to marry Thunderbolt’s own daughter! Time goes on, and Bruce and Betty have a normal a courtship, engagement and honeymoon as possible. He turns into the Hulk each night, Betty not minding the size-changing (nudge, nudge), and by day he seeks a cure for his condition. 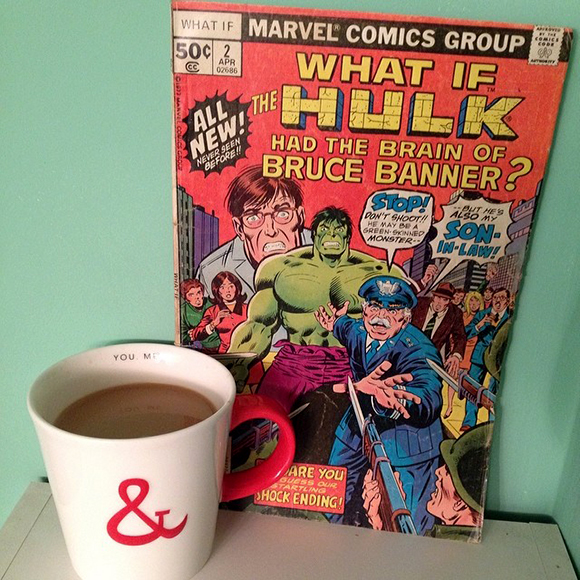 In this world, Loki finds the Hulk a less foolish tool for his plans, and so the green goliath never falls for the trickster’s ploy which eventually led to the forming of the Avengers. Upon an invitation from Reed Richards, Banner helps the leader of the Fantastic Four to cure Ben Grimm’s condition, ending his existence as The Thing and prompting the disbanding of the F.F. (except for Sue, who remains with Reed). As the two scientists work together for the benefit of humanity, a third member of their scientist club joins in the form of Professor Charles Xavier. He hopes that the three will be “able to accomplish scientific wonders”. So, instead of forming a school for mutants, Xavier joins the others until a day when a threat so dire appears, drastic action must follow. Galactus arrives!

The three men find their powers overmatched by Galactus’s might, and so they use their new “psychotron” machine to merge themselves into a super-powerful, hulking, bald and golden-glowing amalgam of their individual beings called the “X-Man”! While X-Man possesses the culmination of power from Professor X, Reed Richards and the Incredible Hulk, his outlook on humanity is now skewed. This results in a visiting Ben Grimm getting swatted into the psychotron right before X-Man runs off to battle Galactus. He defeats the World Devourer in a contest of wills, but the victory has come at a cost. X-Man separates into the three scientists, who now discover that their super powers have all disappeared (which suits them just fine). However, once they return to the Baxter Building, the men discover that Ben Grimm, who the X-Man had encountered earlier, has reverted back to the Thing (X-Man’s emanations upon contact, or something). To make matters worse, he is now a more powerful, angry and brutish Thing, who rampages against his former friends and leaps away into the sky. And so begins the story of the mightiest mortal on the face of the earth, a gargantuan monstrosity mindlessly hostile to humans, and military’s campaign to destroy him.

This issue features appearances by characters and guest stars galore, which include merry members of Marveldom such as Alicia Masters, Betty Ross/Banner, Thunderbolt Ross, Hank Pym, Gargoyle, Igor Drenkov, Sue Storm, Iron Man, Reed Richards, Rick Jones, Loki, Professor X, Ben Grimm, Thor, Janet Van Dyne and Galactus, which doesn’t even include our star, The Hulk, or host, The Watcher! In addition to this What If? tale, the Hulk has gone through two significant periods in his existence where Bruce Banner’s intellect reigned supreme over the Hulk’s simple-minded savagery. The first of these takes place in 1983, where the Hulk took off the tattered purple pants and shocked many young minds with his new purple speedos. He had been exposed to so much additional gamma radiation lately that Banner’s mind took over the Hulk’s body and he got a presidential pardon. Thanks to writer extraordinaire Bill Mantlo, we got to see some pretty rad adventures of a super-powered Banner until the savage personality lurking within his mind broke free. Then, Peter David took the green Hulk (who we hadn’t seen in years) and the gray Hulk (gool ol’ Mr. Fixit) and merged them with Banner’s mind, producing a smart Hulk who was again possessing Banner’s intellect. For a while, we got a witty, well-mannered superhero, but once again, he reverted back to the angry persona we all know and love, because everybody likes the Hulk better when he’s angry. Now, as I take my leave of you, dear readers, I ponder my own question of a road not taken: what if I had prepared the Columbian Roast today instead of the French Roast? Fare Thee Well!

WHAT IF The Hulk Had the Brain of Bruce Banner? is written and edited by Roy Thomas, penciled by Herb Trimpe, inked by Tom Sutton, colored by Glynis Oliver Wein, Joe Rosen and Orz, with a cover by Trimpe, Joe Sinnott and Gaspar Saladino (1977).