Review: Red Hood and the Outlaws #28 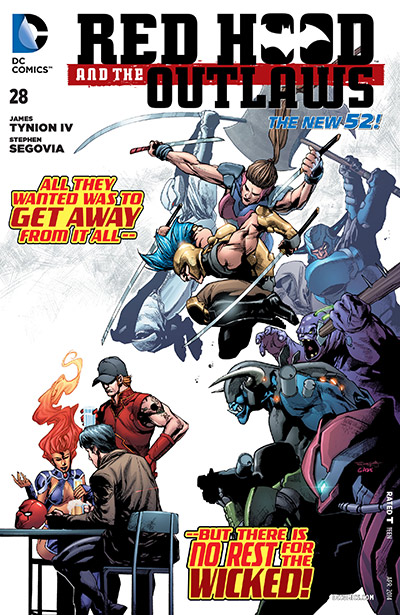 Tynion tells an entertaining standalone story for his final issue of Red Hood and the Outlaws. Tynion’s portrayal of Jason tells a bit about his entire run, with pencils by Stephen Segovia and colored by Nei Ruffino, to deliver some beautiful artwork. Tynion’s dialogue for Roy and Starfire is always enjoyable and he once again proved that he can write a great present day Jason Todd or Red Hood. The balance in Jason’s character speaks for Tynion’s consistency throughout his entire run. Another great aspect of character that Tynion showed off was relentlessness when it comes to villains. With this issue, Tynion showed a little glimpse of how the Outlaws would regularly operate under Jason’s leadership.

If you were ever looking for a place to jump on to Red Hood and the Outlaws, this issue serves as a good starting point. The team goes on vacation and it works as a glimpse to who these characters are in the series. It’s pretty amusing to see Jason trying to use this vacation on the island Elysium to get back together with Isabel, a woman who was introduced early in the series, but forgotten during the ‘Death of the Family’ story arc. From the cover you can guess that this doesn’t work out so well. This one-shot is a nice change of pace from all the magic that was part of the book lately. Who knows if we will see Midas again, he felt like a one time use villain. He was dull and seemed to just be there for this kind of story to work.

I know not a lot of people read this book, which I’m pretty sad about. People may think it doesn’t seem like a must read, but I gave it a chance a while ago and feel it’s a ton of fun. It’s also one of the few DC titles I’m currently reading. Tynion’s farewell leaves plenty of room for the new creative team to start their own adventures starting next month. I’m hoping this will get new readers interested and and keep old readers satisfied.