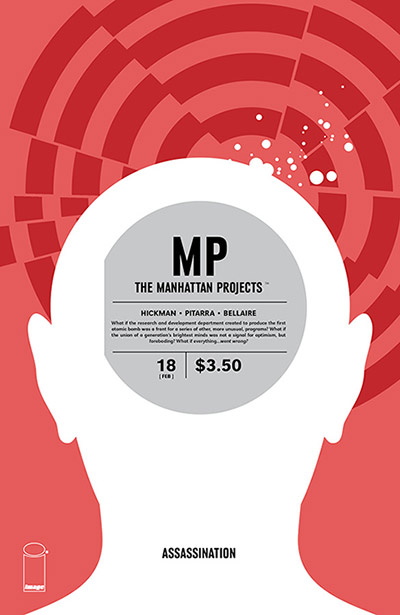 Big surprise, The Manhattan Projects is my pick for the week. It’s tied with East of West for my favorite current title and I recommend both books to comic fans and non-comic readers alike. Whether or not you like super hero books, this is just a great, dynamic story. Seeing what the creative team comes up with every month has been a real treat.

The issue picks up with a gung-ho General Westmoreland going up against the Frankenstein-like abomination that Feynman and Einstein created. The General, like the most of the characters, is an exaggerated alternate version of the real life figure, complete with a personal arsenal and a necklace of ears. After a hilarious battle for the first half of the book, Westmoreland is able to outsmart and kill the blue amalgamation. The last half of the book focuses on the imprisoned rag tag team of historical scientists at the mercy of a bargaining Oppenheimer. The evil, alternate dimension, Albrecht Einstein, ends up being the one to make a deal with the devil and agrees to help carry out Oppenheimer’s still unrevealed ulterior motive. After an event that takes place off panel, the book ends with me once again shaking my fist and shouting, “Damn you, cliffhangers!” As always, it will be a grueling month awaiting seeing what happens next.

Hickman continues to keep me intrigued with this fun, alternate history of the 20th century. A lot of crazy things happen, but they always serve a purpose, which are referenced in various issues. I have to give a shout-out to artist, Pitarra, because I have recently learned that Hickman trusts his artist so much that he often times gives him a rough outline, like, “They argue for 5 pages….” and the rest is left to the artist’s imagination. He manages to keep the look playful, even when depicting extreme violence. An example of this is in the first half of the issue, during showdown between the General and the pan-dimensional alien, the artist includes writers and artists Scott Snyder, Greg Capullo, Jeff Lemire, as well as Jeff’s character, Gus, from Sweet Tooth. They meet an entertaining demise, but there are often these subtleties in the background that require an attention to detail. In one issue, I think I even saw Twinkie the Kid! Another thing I noticed was that Bellaire’s color palette seemed a bit bolder and more assertive. It really helped this issue pop in a series that is already so visually unique. Her coloring is just as integral to the book’s style to make it unlike any other on the shelf