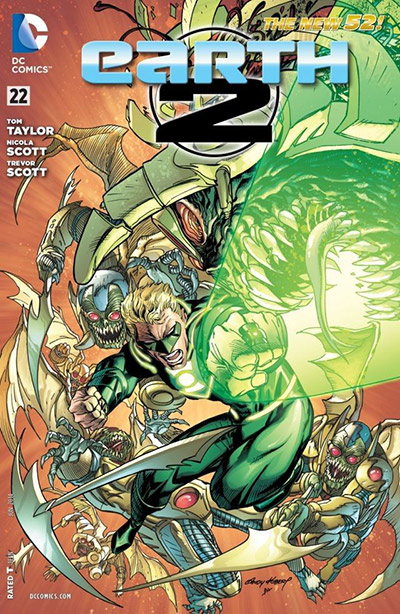 Earth 2 is easily one of my favorite books being published right now. I loved Robinson’s run on it and Taylor has been doing an amazing job continuing the thread. I love that this series has all the interesting characters that I care about without having to read 10 different books to get the full story. It’s all wonderfully self-contained. I look forward to this book every month and eagerly read it first of my pulls.

The issue picks up narrating the return of Alan Scott. The Green Lantern is resurrected after a fatal blow dealt by Superman at the end of the Dehrain War. Scott’s involvement in this issue is brief, despite being on the cover, but we see his ring has bigger plans for him and that he is pissed. Elsewhere, Superman is ready to kill Sloan for information on the unknown Kryptonian, but it seems he has bigger problems. He declares Batman their greatest threat and takes off after the group with an army of parademons. Val is the central focus of this issue and we find out his full name is Val-Zod. We get a real feeling for everyone personality through his eyes. Taylor does a great job defining who Val is as a character as he finds a compassionate mentor in Lois. She takes him under her wing, so to speak, as he discovers his growing powers. It’s obvious that she can’t help but see a bit of the Superman she once loved in the new Kryptonian.

Tom Taylor continues to dominate this book, finding the perfect balance between action and character moments. It never feels too heavy handed in either direction, which is a difficult thing to do when handling so many characters and building such an expansive world. The pacing is fast and exciting, but the quieter moments are just as necessary and don’t slow the story down. Nicola Scott’s pencils return to make everything look great. The action remains fluid, as well as the still images, and we get a lot of amazing moment to moment pages with dynamic panels.