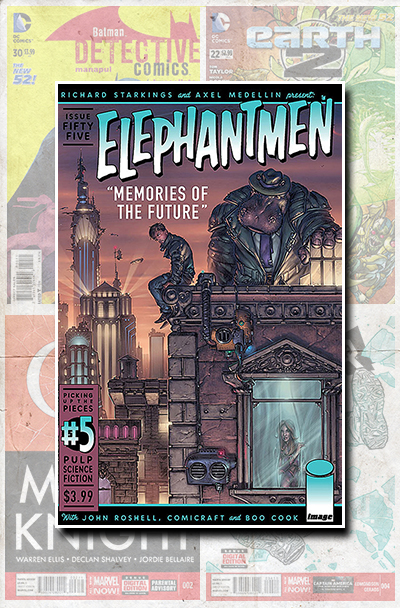 A bold new direction for DETECTIVE COMICS as THE FLASH creative team of Francis Manapul and Brian Buccelato take over the creative reins! Batman finds himself knee-deep in a new mystery involving a deadly new narcotic that has hit the streets of Gotham City.

Earth 2 #22 by Tom Taylor and artwork by Nicola Scott

Elephantmen #55  By Richard Starkings and artwork by Axel Medellin Machain

“PICKING UP THE PIECES,” Part Five

Moon Knight #2 by Warren Ellis and artwork by Declan Shalvey

Black Widow #5  – By Nathan Edmondson   and artwork by Phil Noto 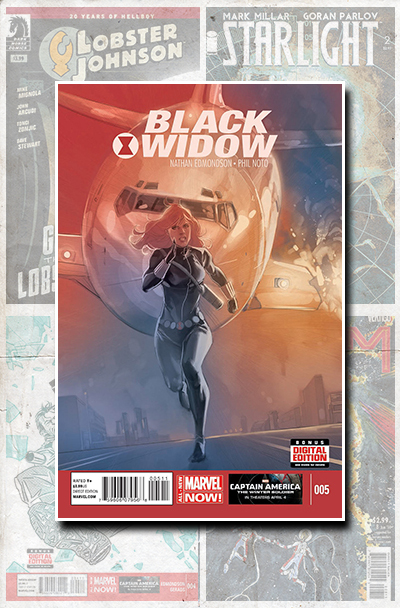 Lobster Johnson: Get Lobster #3 – By Mike Mignola,John Arcudi and artwork by Tonci Zonjic

All police resources are shifted to taking down Lobster Johnson after a vicious grenade fight in the NY streets. Meanwhile, bank vaults all around the city are exploding. Lobster knows it’s a trap, but justice is not afraid of traps.

Starlight #2 – By Mark Millar and artwork by Gorlan Parlov

Duke McQueen once saved an alien world from destruction—but it happened in a place nobody believes in, during a time nobody remembers. Surrounded by memories of his late wife and his happier past, Duke’s days as a hero are long gone…or so he thinks! Now, a young visitor from the world Duke once saved is coming to him with a desperate plea for help. It’s one last chance at adventure for Duke, and another chapter to unfold in the ever-expanding Millarworld Universe!

What is Nika’s ultimate destiny? And what role will William play in the survival of humankind? Can they finally be reunited before the universe unravels all around them? Vertigo’s sci-fi epic reaches its mind bending conclusion.