Review: Wolverine and the X-Men #3 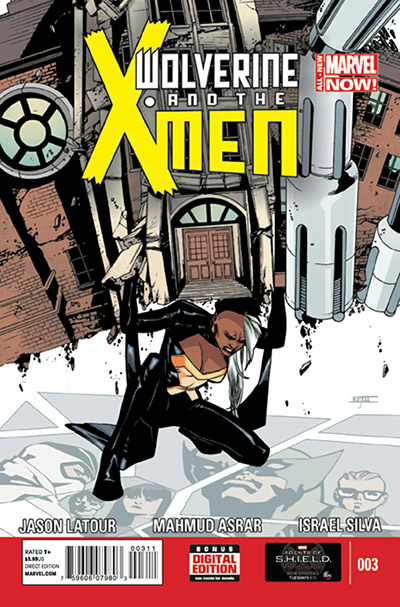 This series started by showing us glimpses of the future X-Men, mainly that Quire will become the Phoenix and Evan will fulfill his destiny as Apocalypse. Because of all this, the overzealous Phoenix Corporation has set out with time travelers to manipulate Quire into becoming who he is meant to be. Wolverine and Storm were previously beaten down and telepathically tortured by a future Askani warrior, but in this issue, Storm shows her strength and why she is known as a Goddess. Storm and Wolverine are able to track down Quire, but not before he has been manipulated by the Phoenix Corps’ young CEO to believe that all the mutant school can teach him is violence. It’s still unclear if the Phoenix Quire is because of Wolverine’s teachings or having left the school behind.

While all of this is taking place, we see that the Askani has ran off to attack the school. His main mission is to kill Evan before he can become Apocalypse. We’re shown a flashback of Remender’s X-Force doing exactly that, so it is unlikely that will happen again considering the guilt everyone was racked with over it. Either way, as easily as it is for the Askani to subdue everyone at the school, he doesn’t seem to be interested in hurting any of the other children.

Latour has been doing a great job writing a fun X-book among the many Wolvie titles. There were plenty of funny moments and I’m really starting to become a fan of Quire, a character I have been pretty indifferent to in the past. I’m actually excited about the prospect of him reaching his potential and wielding the cosmic Phoenix Force. The art has been solid. Asrar illustrates an interesting trip through Quire’s mind that shows just how disturbed the young student is. I always love seeing what snarky shirt he wears from issue to issue. All in all, I’m pleased with the relaunch of this book and the direction it’s going in.