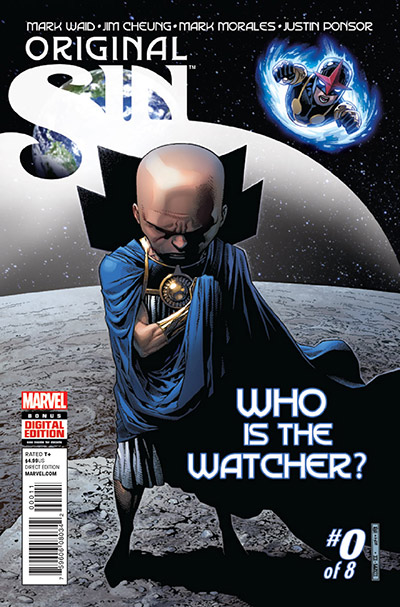 Original Sin #0, written by Mark Waid with art from Jim Cheung, Paco Medina and a bevy of inkers, opens up the previously unknown origin of Uatu, the Watcher. Waid uses Sam Alexander, the current Nova, as the point of view character. Still relatively new to the cosmic universe, Sam pays a visit to The Watcher’s moon base in hopes of learning more about his mission and his motivation for being the universe’s biggest voyeur. Waid delivers a clean, comprehensive look at Uatu’s own “original sin” that adds an undeniably heart-string-tugging human element to the entire story. There’s also a pretty big revelation about the character as we learn he’s watching a lot more than we ever imagined. As far as introductory issues go, this was nearly perfect.

OriginalSin # 0Although Jeph Loeb came up with the pairing of Nova and the Watcher, Waid’s version is incredibly genuine and full of emotion. Nova’s narration is a little excessive in the middle of the issue, but Waid is able to channel the right amount of humor and pathos to the character, focusing on Sam’s underlying longing for his father along the way. For someone who hasn’t kept up with the current Nova run, Waid provides readers with enough information to bring them up to speed on Sam Alexander before turning the focus on the Watcher. Jim Cheung and Paco Medina share pencilling duties on this issue. But what really shines is Cheung’s art and Ponsor’s colors. This is the perfect team to tell this story. Cheung makes Sam look incredibly young, which adds to the character’s overall charm and demeanor and puts some great expressions on these characters’ faces.

While the focus on Uatu and his growing relationship with Nova might not be the most significant lead-in to a massive crossover event, Original Sin #0 is a wonderfully revealing story that opens the history of the Marvel Universe for new readers. Whether you know part of the story or you think you know the whole thing, this is a fantastic introductory story to this character and his people. The issue has plenty for readers to study, interpret, and quite simply, enjoy. What develops is a moving encounter between an unlikely pair that anyone should be able to relate to.