Comics ‘ N Coffee:Beware! The Claws of the CAT #2 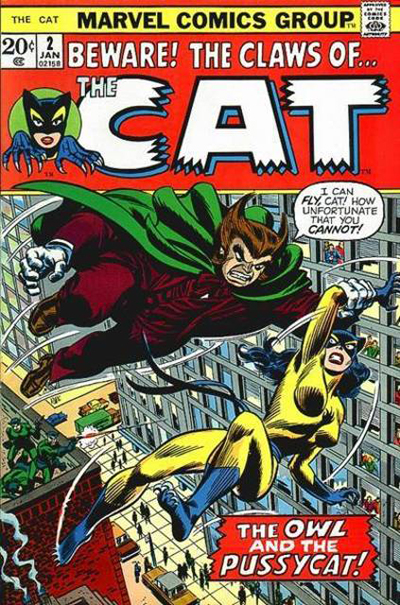 The comic book medium was not oblivious to the Women’s Liberation Movement, which was hitting full stride in the early 1970s. Wonder Woman gave us her famous “Women’s Lib Issue” in 1972, where a de-powered Diana Prince fulfilled the presentation and deconstruction of a classic straw man argument (DC pulled the plug on that storyline following that issue). There were several attempts to feature female characters in comic books, hoping that this would result in new female fans, which was a very small percentage of their readership. While this did not result in a large increase in readers of any gender, it did produce some interesting and noteworthy stories. When Beware! The Claws of the CAT was launched in 1975, the first issue featured veteran creator Wally Wood as inker. New inkers followed him in the subsequent issues. Some theorize that Marvel pulled him from the book because he drew nipples on the book’s female characters (which the editor would need to go back and white out), but it very well might’ve been due to his declining health. The story of Greer Nelson, aka The CAT, would go on for three more issues and today Comics ‘n Coffee is proud to present our 51st column with The CAT’s second issue, called “The OWL and the PUSSYCAT”!

Our story begins with action! Our hero, The CAT, prowls atop the roof of Chicago Hospital, when suddenly a trio of ominous figures donned in capes and cowls swoop down upon her like birds of prey! She quickly reminds these owl-costumed creeps that “cats chase birds, not the other way around”, and proceeds to make short work of her assailants. When a police officer emerges the building in response to the thugs’ gunfire, CAT narrowly saves him from getting plugged. A helicopter hovering overhead rains bullets, barely missing the policeman and CAT, yet slaying the henchmen rather than allow them to be captured. While the police want her to stick around to answer questions, CAT uses her superior strength and agility, along with her stainless steel claws, to fling herself safely down the side of the building.

Pausing to catch her breath, the CAT removes her cowl to reveal the tired features of an exhausted Greer Nelson. Her enhanced senses, steel claws and cat-like athletics allow her to maneuver along the outside of the building to find that her mentor, Dr. Joanne Tumalo, lies inside atop a hospital bed surrounded by her physician and a strange man (who closely resembles the actor Ted Danson). Their conversation reveals that the man is Dr. Tumalo’s nephew, who wishes to move his aunt out of the hospital while she is still in intensive care. Once they leave the room, Greer enters through the window, kneeling at Dr. Tumalo’s bedside in shock, since Greer had thought her mentor had been killed by the evil Donalbain (last issue). Somehow, due to Greer’s enhanced senses, she can hear Dr. Tumalo’s unconscious thoughts, which tell her that the strange man is NOT Tumalo’s nephew after all!

After all she’s been through in the past 24 hours (i.e. a fierce battle in issue #1), Greer returns home and tries to get some rest, although her mind is tormented by the unusual turns her life has taken. It’s these turns which present an opportunity for her to revisit her origin story, in which she makes mention of her murdered husband, the injustice she faced in the workplace (which “gave birth the Women’s Liberation Movement”), how she went back to college and joined with Dr. Tumalo for an exciting experiment, and then used the experiment’s results to fight evil and start her new life of adventure as the CAT.

Following a two-page advertisement showcasing the cartoons televised on NBC’s new Saturday morning lineup, Greer pilgrimages to the hospital the next morning where she is introduced to the “nephew”, Mr. Arthur Tumalo. As he excuses himself to make a few phone calls, Dr. Tumalo’s attorney speaks with Greer about family fortune and other matters. Unbeknownst to either, however, Dr. Tumalo is being abducted from her room and Greer senses the danger only in time to see the ambulance carrying Dr. Tumalo racing away, driven by Arthur, aka Evil Ted Danson! Greer sprints with cat-like speed to her nearby car, deftly tracking the ambulance’s movements toward what seems like a dead end. However, as she tries to figure out how they disappeared while sitting in her parked car, a pair of armed henchmen sneak up and order her into a nearby building.

The two thugs escort Greer into an elevator where Evil Ted Danson and Dr. Tumalo (on her hospital gurney) are waiting. When they reach the bottom, they are confronted by the deadly and megalomaniacal villain, the OWL! This often-time foe of Daredevil has abandoned the hero-saturated island of Manhattan to seek more vulnerable territory in Chicago. Little does he know that Chi-Town’s newest super hero is mere inches away. Greer’s curiosity prompts him to explain his nefarious plan, in which he has devised complex machinery to siphon the memories of renowned businessmen, artists and scientists to be implanted within his own brain, making him the most genius of all geniuses! He has already stolen the minds of several men and women of brilliance, and Dr. Tumalo is to be his next victim! Before Greer can act, however, she is rendered unconscious by the butt of a gun from one of the OWL’s thugs.

Awaking inside a dark cell, Greer shreds her civilian clothing to reveal the garb of the CAT, then uses her honed skills to pick the door lock and escape down the hallway. She happily dispatches the jerk who knocked her out, then uses her senses to track down Dr. Tumalo, finding that she is too late … Dr. Tumalo’s mind has been STOLEN! The OWL responds to Greer’s escape by sending his owl-garbed henchmen in search of our hero. The thugs fire their weapons, which produce ricochets of “ping!” and “kchow!”, but miss the agile form of the CAT. Suddenly, the OWL swoops down from a high window, attempting to use the element of surprise to take down this unknown interloper. She delivers judo flips and karate chops with strength to rival his own, so he flees back to his hideout as police begin to swarm upon the scene. 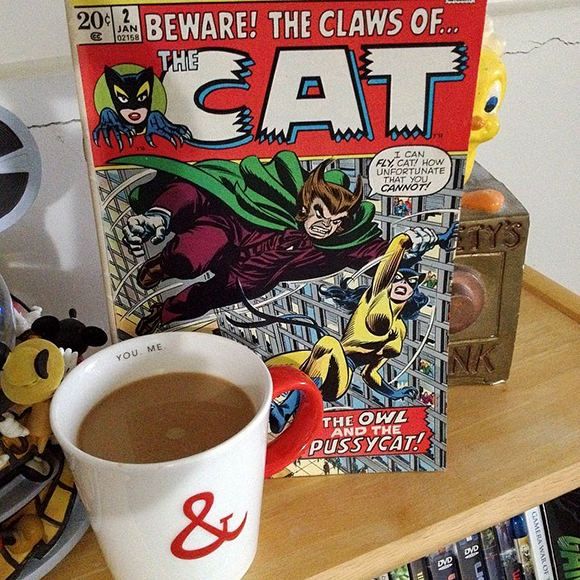 Down in the laboratory, the OWL is shocked to find that Evil Ted Danson has usurped his plan to input the stolen memories of his victims into his own mind. As the OWL approaches his traitorous cohort, Evil Ted Danson fires his pistol at the OWL. The bullet misses its target, however, and hits the machinery instead, causing the flow of memories to flood into Evil Ted Danson’s head too quickly, sending him into a deep coma. During his escape, the OWL runs headlong into the CAT, who stymies his vicious assault at every turn. Her deflections and counter-moves inch the OWL closer and closer to the edge of the rooftop until he falls over the side! Amazingly, the OWL displays his levitation/gliding ability(a power unbeknownst to the CAT), giving him the ability to escape both the CAT and police to safety. Greer Nelson is then left alone to reflect on her injured mentor and the burden of responsibility as a super hero, which continues next issue.

Linda Fite scripts a very compelling story which covers a lot of ground within the pages of a single issue, and Marie Severin’s artwork is simply gorgeous. I don’t obsess at the artwork of too many comics, but this one earns many repeat looks at the beautiful images within each frame. “The OWL and the PUSSYCAT” is not only this issue’s title, but also name of a 1970 film starring Barbara Streisand and George Segal. It fits perfectly, although it may be that the story was written explicitly to use the title and piggyback on the film’s popularity. It is with some irony that a film about a part-time prostitute shares the same name as an issue featuring a “liberated woman” in battle against misogynistic miscreants. Fite and Severin show some serious creative chops during the CAT’s short publication run, but the effort was ultimately doomed due to a combination of inconsistent artwork (completely different art teams for issues 2, 3 and 4), editorial constraints and Marvel’s need for a book to make money. In Stan Lee’s own words (from the Superhero Women, 1977), “We blew it.” The CAT would live on, however, as Greer Nelson would guest star in books like Marvel Team-Up before she underwent the changes which transformed her into Tigra the Were-Woman, a well-known Avenger. Later, a woman named Patsy Walker would become Hellcat, a hero with abilities and a costume similar to the CAT. It’s all a rather fascinating progression and I highly recommend sifting through these characters’ histories and digging up their respective stories. Fare Thee Well!

Beware! The Claws of the CAT #2 is written by Linda Fite, penciled and colored by “Magnificent” Marie Severin, inked by “Gentleman” Jim Mooney, lettered by Charlotte Jetter and edited by “Rascally” Roy Thomas, with a cover by “Jaunty” John Romita.