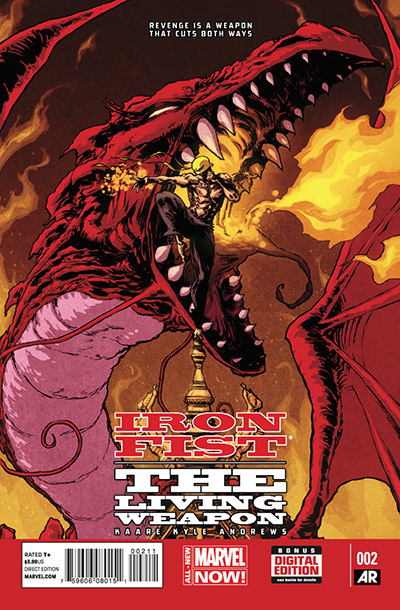 After an explosive first issue, Danny Rand sets off on his trek back to K’Un Lun. This issue continues the action as we get more of an idea of the threat Rand is facing, but also reveals more about Danny’s past, the death of his parents, and how he first arrived at K’Un Lun. This secons issue is better because it was able to build upon the first issue, setting the series up for a much bigger arc.

We get a flashback to the events just prior to the first issue. The city of K’Un Lun is still beautiful and the people are celebrating sacrificing the dragon that keeps their powers thriving. All this before K’Un Lun is under attack and the girl from the first issue is sent on a mission to find Danny to bring him back. Back to the present day, we pick things back up where they left off in Danny’s apartment. Supposedly, K’Un Lun is a mystical place that can only be entered from our world every 10 years, but this seems to be of no concern to Danny. His family’s building hides a secret portal, which is exactly what he uses to get back.

The visuals of this book look like no other Marvel title on the shelf. It is serious and onimous and the flashback scenes are beautifully rendered. Their contrasted style is mostly muted earth tones, but adds a weathered feel, mimicking folded, crumpled paper. The enhancements tell the story as well as any script. It may not be the most upbeat comic out right now and there are some heartbreaking scenes, but this is by far one of the funnest books currently being written.