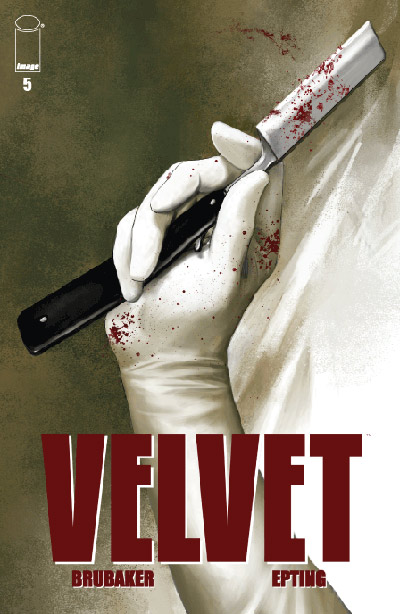 Velvet and creative team of Ed Brubaker and Steve Epting are back after about a 2 month hiatus. The reason for delay is explained in the Velvet5beginning of the letters page and between the release of The Winter Soldier and the writer moving several times, we’re really just happy to have one of the best books being published back. After reading this issue, the delay doesn’t really matter, cause it was definitely worth the wait.

At the end of issue 4, we saw that Velvet was hit pretty hard with the news that codename, Mockingbird, the man that she married, was not a double agent. Jump to this issue, in 1956, as a young Velvet is enjoying a honeymoon on the beach with fellow agent, Richard Donavan. A waiter brings them drinks along with coded messages, signaling that their honeymoon is over, literally as much as figuratively. Readers also get a glimpse at a very young, teenage Velvet, left by her father at the academy where she is mentored to become the spy she is today. The issue picks up pace and we see Velvet’s husband sneak off from their hotel room to make a drop off to Professor Von Strauss, only for him to return to Velvet very awake and both seeming very untrusting of each other. What follows is a beautifully drawn and paced fight sequence, and ends with why the revelations of the previous issue hit the character so hard.

Brubaker shows us Velvet’s cold, dark past that gives us insight into who the woman has become. The twist about Mockingbird feels like a gut-check because he is able to make us feel it through Velvet’s perspective. The real standout in this issue for me is Epting’s art. He is able to clearly show us Velvet at different ages, while keeping her same nuanced features from age 16 though her forties. The subtleties in the art help smooth out some of the time jumps back and forth that may otherwise become confusing. Image has been putting out some really solid books lately and this book should be added to the top of the list. With the schedule getting back on track, now is the perfect time to read the previous issues of this arc to be caught up in time for the next issue slated for the end of June.