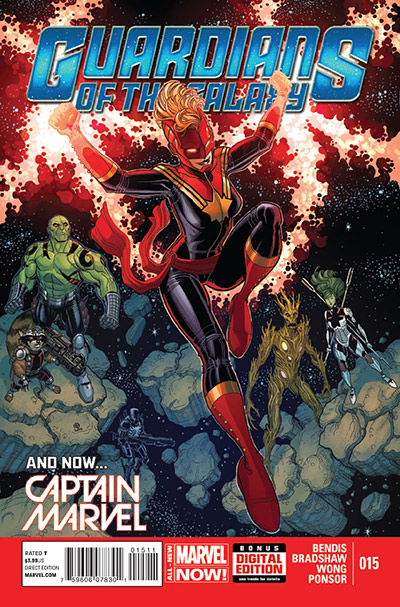 In the last issue of Guardians of the Galaxy, we saw the team picked off by various enemies they’ve had over the years, and in this issue, we see where each of the Guardians have ended up. Rocket Raccoon is being oporated on by the Kree, overseen by the Supreme Intelligence who has a scientific interest in his rare species. Gamora is being beaten and questioned by the Badoon. Groot has been attacked and abandoned by The Brood. Drax has been imprisoned by the Shi’Ar and demands a trial by combat, which they don’t seem keen to oblige. Agent Venom is hunted by Skrulls, pretending to be members of The Avengers. And finally Star-Lord is at his father’s mercy. With the Guardians each captured by different alien races or stranded away from one another, things seem pretty bleak for the team in this issue. Bendis’s run on GotG has been a fun, action-packed ride with a crossover arc with All-New X-Men, but it seems like things will be headed into more dire territory in the next few issues.

This issue seems to be a bit of a filler, but it was still enjoyable. Bendis has used this before to varying levels of success. But it seems that the setup they put in motion should push the next issue forward in a positive direction. Bradshaw nails the characters’ looks and expressions for most of the panels and his fight scenes and work on the the galactic side of Marvel all look pretty spot on here. Visually the book is a treat.

All hype from the upcoming movie aside, the current comic has been solid through every issue, and while this one might be mainly set-up for the next arc to come, it still has that familiar punch. I’m interested to see how they get out of this, and more directly, how Captain Marvel’s bold focal point on the cover will factor into the events to come.