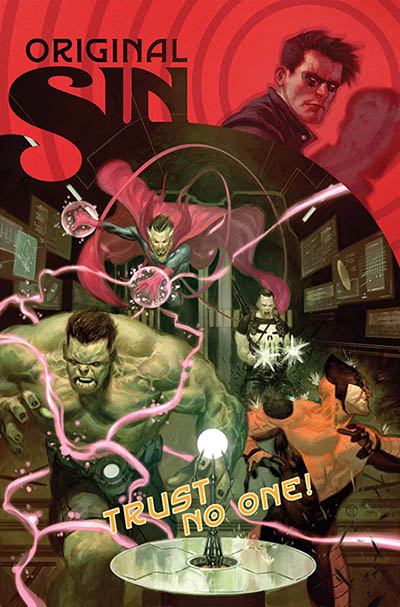 If you thought the end of the last issue was crazy, wait until you read this one. Compared to the first few issues of this arc, this one is structured less on action and more on the subtle nuances between the characters. It builds upon Bucky’s role from the cliffhanger, but never quite explains why he took the actions he did. But if you want to grab readers’ attention in a Marvel event, having Bucky Barnes do a

heel turn and behead Nick Fury is the way to do it. Even as shocking and significant as that twist was, most readers are probably trained by this point to be skeptical of any twist that comes so early in a story. Original Sin is shaping up to be a murder mystery and in that tradition, nothing is what it seems.

In this installment, we are given more clues as to who or what may have killed the Watcher but not enough to truly have a cohesive idea of the murderer’s true identity. Aaron has the reader continually switching between the different teams as they slowly come to realize that they have all been pawns in the grand scheme of things. Even though this story involves a large portion of the Marvel Universe, it’s pretty cool seeing these little secret groups working on trying to get answers, even if they’re not fully sure who they’re actually working for. Aaron turns the story on its head in some ways, and even if the pacing slows down again, the overall sense of unpredictability to this conflict keeps the interest level high.

Having reached the halfway point and with each issue, I have become more invested in this series. Too many times in past events, there’s a lot of excitement in the beginning and then it all starts to go downhill. Despite how often we have big comic book events and crossovers, it’s not every day we have one that keeps you glued to the pages every single issue. While focusing on the big mystery of who killed the Watcher, Jason Aaron is giving us other mysteries that are keeping us in suspense and making our jaws drop. Mike Deodato and Frank Martin are delivering great art and color. The dark feel of the art really adds to the tone of the story. On the whole, things are looking pretty good for this event. The twist in this issue, if less overtly surprising than in issue #3, is actually more intriguing and full of potential. The worst part is now having to wait for the next issue.