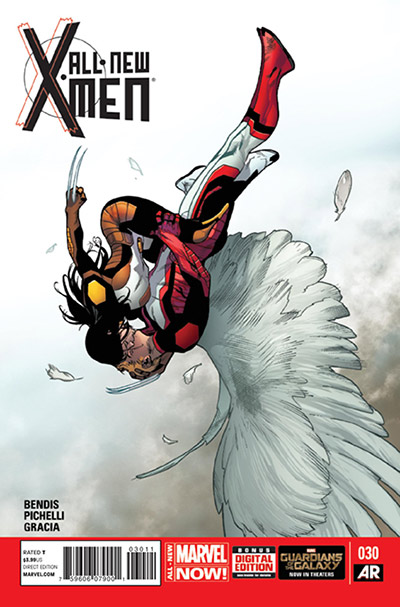 For a while it seemed like Bendis was maneuvering young Cyclops and X-23 into a romance, but now young Cyclops is off gallivanting through space, and Angel has emerged as Laura’s budding love interest. It doesn’t have quite as much comedic potential, but it allows for some heartfelt interaction between the pair as they cut loose and Laura is actually allowed to experience some simple, positive human emotions for a change. Issue #30 follows on directly from the previous issue, opening with an insight into Angel and X-23’s night away from the chaos of Cyclops’ secret school. Laura’s conversation with Warren is somewhat awkward, but when they’re moved to action, her physicality is as graceful and confident as you’d expect from the precision-trained soldier that she has been trained to be. This opening shows young love and romance, all while still displaying the ever-present danger of being a mutant — but most importantly, it’s fun, and that is really what helps this book stay light as it crosses the line between teenage angst and world-wide danger.

This issue also puts focus on a young Jean Gray and Emma Frost, as their sordid history is dragged into the present, complete with some perfectly picked flashbacks of iconic moments in their lives. This issue shows how a character’s past can influence their present, whether consciously or subconsciously. It captures the arrogance of youth, contrasting it against the experience of adults, who know that they’re all still struggling to keep it together, too. All of which means they have a lot more in common than they might imagine.

Over the past few issues Bendis has been laying the foundations to integrate the two factions of the X-Men who have been kept relatively separate, only getting to interact when the fate of the X-Men hangs in the balance. Given the time-displaced nature of the book’s main characters, this series has a certain fascination with the past, but Bendis does well to pay homage without beating the point over your head and has allowed for a bit of a soft-restart for the X-verse. This level of narrative weaving could have tangled Bendis’ storytelling in knots, but he refers to just the right pieces to remind us of the nature of the X-Men’s past. Pichelli’s artwork switches between understated talking heads and kinetic action panels with ease. Her previous work with Bendis on Ultimate Spider-Man means that she’s no stranger to bringing his teenaged protagonists to life. This is reflected in her beautifully rendered expressions that are often more telling than the words the characters are saying. Gracia’s colouring splits the two scenes with a mix of muted and vibrant tones that really highlight the differences between X-Men.