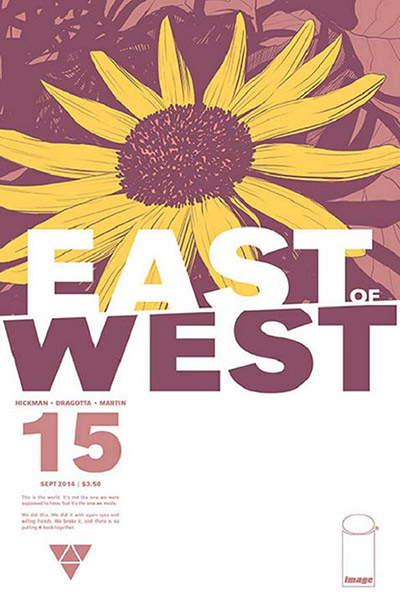 Hickman and crew took a break for the month of August, but when we left off back in July, we witnessed the first action in the upcoming war with The Nation destroying The Tower of Armistice and then firing upon The Republic of Texas. The issue ended with Death heading to the Lair of the Beast to rescue his son. During the same time, the other Three Horsemen were already descending into the Lair to destroy the child. With everything that was set in place, we were left waiting with a hell of a cliffhanger.

The issue starts half way across the world to Asia, home of the Republic, far from the action of the previous issue, but the book’s events do seem to be snowballing. Unlike other issues, this issue sticks to only two storylines. The first third of the comic examines the House of Mau, specifically Xiaolian as she discusses the upcoming war and the inevitable demise of the Republic of Texas. She has some flashbacks to discussions she had with her father when she was held captive. A world war has been ignited, the Horsemen are off to murder Death’s son, who has finally broken free of the wires and machinery that have restrained his power thus far. During the last few pages, Death’s child names himself “Babylon,” after the first city to emerge from the darkness, and his AI sidekick, “Balloon.” Still dependent on the machine armor from his cell, Babylon sees only death and destruction through his visor. “WE HAVE TO DESTROY THIS AWFUL PLACE…” he mutters in horror, as he is revealed to be standing in the greenest, most lushly expansive field. The Horsemen might be out of the way, but a wolf in sheep’s clothing has emerged in the boy’s trusted Balloon. This issue feels more like a beginning now that characters have been rearranged, agendas have shifted, and everyone is on the cusp of all-out war.

One of the best aspects of East of West is that the story is told through constantly shifting narrative perspectives. By never settling on one character, faction, or location, the creative team behind East of West allows the reader to experience this world with fresh, unbiased eyes. The reader is an inhabitant and while Death does serve as a main character throughout the book, he acts as more of a catalyst for the larger story rather than a consistent point of view as the book’s protagonist. Dragotta depicts the umbilical-cord-like apparatus that Babylon is attached to, allowing every bit of background and foreground architecture to shine along with it. The confrontation between Conquest and Babylon is a highlight of the issue, from both an art and writing perspective. It allows for the first true moment of character development for Babylon, his pondering on the concept of mercy, and simultaneously allows Dragotta to depict Babylon’s first fight in a visceral, calculated, and beautiful way.