Review: The Wicked + The Divine #4 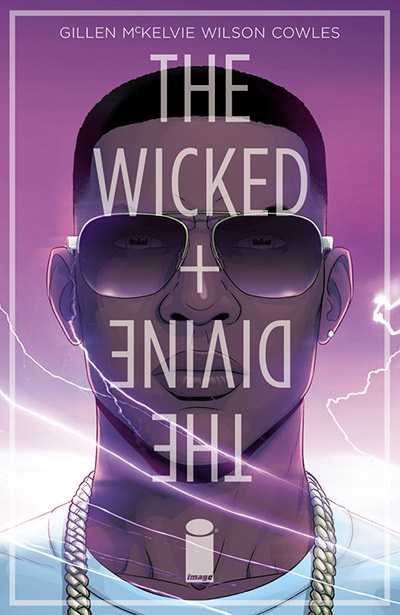 The Wicked + The Divine is a book about music, pop culture, murder mystery, and various mythological deities. The basis for the story is that Gods live among the rest of humanity to inspire us, and two years later they die, until the cycle is started another 90 years later. Given only two years to live, these Gods love very colorful lives, but are to refrain from using their powers public. That is until Lucifer, is put on trial for exhibiting her powers to kill two men, and then framed for killing the judge at her trial. The book features Laura, a normal human who believes Luci, employ the help of a local journalist to find the true killer.

We’re far enough into the plot that main players have been established and it’s time to meet the rest of the family. This issue gives us much more of the pantheon through Baal, who begrudgingly introduces Laura, and us by extension, to more previously unseen characters, Woden, Minerva, and Ananke. The designs and characterizations of these beings inhabiting the bodies of mortals were previously foreshadowed. Laura tries to keep her cool, but underneath it all she’s awkward and awestruck in every panel. She has a funny scene with Baal as he speaks directly to her while shutting down Cassandra prodding him for answers. The end of the issue brings us back to the androgynous personification of the Devil. Her relationship with Laura is what ties the teenage girl to the supernatural world. But once Luci has lost hope, she makes a decision that sets things on fire as she declares her next move.

It’ll be interesting to see where this story goes and how much story there is to tell. It reminds me in ways of the first few issues of God Is Dead while Hickman was sharing writing duties. TW+TD is in the early phases of what Gillen has already confirmed whose ending is years off, implying that these first issues are the groundwork for a series that could have some very complicated, relationship-fueled storylines in its future.