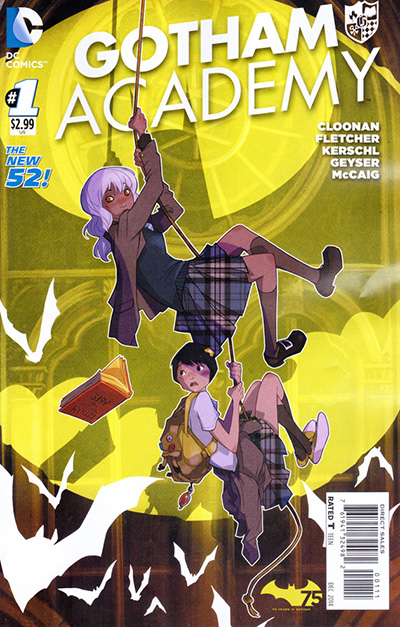 Gotham Academy begins its run! It’s a new look at Gotham from (deep breath) writers Becky Cloonan & Brenden Fletcher, artist Karl Keschl, and colorists Geyser & Dave McCaig. This is an interesting sort of book to see from DC Comics, and I like to see them taking a risk on a weird property like this. The obvious shorthand for Gotham Academy is to say it’s Batman meets Harry Potter, and the good news is I mean that in the best way possible. We’re invited to follow students through their time at a prestigious school located in Gotham. What could go wrong?

The art has an animated feel to it thanks to the colors from Geyser with Dave McCaig. The characters are bright and flat, which makes them stand out from the painted look of the background. The flat tartan texture is a bit silly and so it helps to set the general tone, but it also adds a certain surreal element to the Gotham Academy. Kerschl has fun with the panel layouts and composition in a way that reinforces the adventurous, playful tone of the book and characters. Yet Kerschl never lets you forget you’re in Gotham. Kerschl works with the gothic elements, he never ignores them, but he also never lets them get so heavy as to overshadow the characters. Kerschl makes sure that the Academy itself is a character.

The story from Cloonan and Fletcher has kicked off Gotham Academy with a good setup. They lay down some plot threads, but enough happens within the issue that it still feels like there’s movement. The premise is simple: Olive is assigned as a Mentor for Maps, who happens to be the sister of her ex. Maps is really likable, and I genuinely enjoyed her talking about leading a roleplaying game while exploring the bell tower. There’s an honest enthusiasm in the character that makes her difficult to hate. Olive appears to have a criminal family history that will probably become part of her core story in the future. So she hates Batman, and that’s her thing. As an idea this works, but Cloonan and Fletcher will have to invest more into her character so that she’s a bit more than a sad sack who hates Gotham’s hero. I’ll be interested in looking back in a few issues to see how they choose to develop her – there’s certainly a risk that Maps might steal the show.

The crisis while exploring the belfry was perhaps a bit obvious, but it was fun and simple. At its core the moment is supposed to show that Olive’s brave, that she’s hiding a heroic side, and it’s elegant in doing that. The smartest thing Cloonan and Fletcher do is let this issue really focus on Olive and Maps. We’re given glimpses of other characters, and we know Gotham Academy is going to introduce others, which is why I really appreciate the writers’ choices to build this issue with such a tight focus. In a new book, in a new setting, it’s really tempting to throw everything you can at the audience and hope something sticks. But Cloonan and Fletcher clearly have confidence in what they’ve created, and show a lot of restraint with this book. There’s a lot of polish and love put into Gotham Academy, and it shows.