One of the things we like to do here at Comic Impact is feature various comic book artists each month. Some you may know and some that are new to you. The idea is to make people aware of the amazing talent that’s out there and hopefully to get you interested in reading new books! This month we’re taking a look into the mind of Axel Medellin 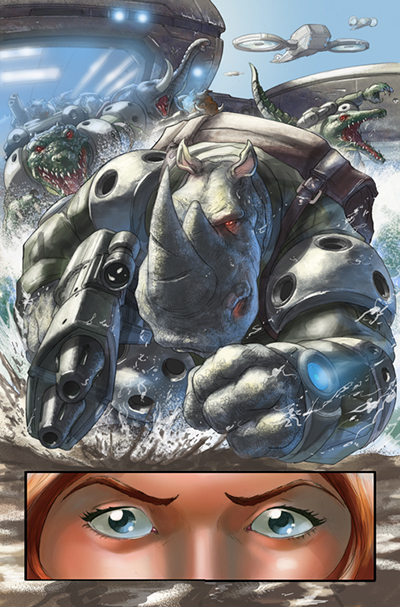 1-Who are you and what are you known for?
Hi, I’m Axel Medellin and I create comics. I’ve been doing it professionally for about a decade now, and I’ve done work for Metal Hurlant, Heavy Metal, Platinum, Zenescope, Zuda, Boom! Studios and Image Comics, among others. Whether I’m known for any of that is up to debate…

2-Who do you currently represent and what are you working on?

Currently I’m the regular artist of Elephantmen, the sci-fi comic created by Richard Starkings and published by Image Comics. I started with a guest page in issue 25, and I’ve been around for most of the issues since. As I’m writing this, issue 59 has been out for a week, and right now I’m coloring something sexy, crazy and/or disgusting.

3-How did you get into the world of comic art?
That would be my grandpa’s doing. He used to babysit me since I was a toddler, and when I was three or so he found out I liked seeing the funny pages in the paper and watching cartoons, so he started buying comic books for me. On those days we had a great run of mexican reprints of the classic Marvels from the sixties, maybe five comics a week! So, before I was in elementary school I was well acquainted with Jack Kirby, Steve Ditko, John Romita, John Buscema, Gil Kane, Ross Andru, and all that fine crew.

I was pretty shocked to discover that no other kid in school had the slightest idea of who any of those gentlemen were, and that I was the only one who was worried about Galactus or the latest Avenger’s lineup, instead of the weekend soccer game.

4-Did you ever think as a kid that you would be working in the comics industry?
I don’t know if I made the connection at that time that making comics was a job… I just thought they were fun and I started copying panels and trying to make my own comics since I could make pencils work. I do remember that on career day at high school, I was the only one who said “comic book artist” when everyone else had serious and realistic pursuits and had a good laugh at my expense. I even got my degree in Industrial Design, which is quite cool, I like working with materials and I love concept art. But as soon as I could after school, I got a job were drawing was the main component.

5-Do you read comics and if so, what are your favorite titles?
Absolutely. As Stephen King said: to be a writer, you need to read a lot and write a lot, and that applies to us, too. I tend to follow writers and artists rather that characters or events… I’m terrible at continuity and cross-references, I just like good stories. That being said, Saga is a wonderful, wonderful read. I’m also following Sandman Overture, Black Science, Low, East of West, Ragnarok, Star Slammers (this is a great time to be a Walt Simonson’s fan!), Shutter, Hellboy, the current Daredevil, Rocket Racoon, Star-Lord and Black Widow… other than that I pick up anything that catches my eye on any given week. I need to give a special mention to The Wake. Oh, my, I hope I can get to create something that clever, engrossing and beautifully drawn.

6-Who is your favorite comic book character?
Hellboy, hands down. Spider-Man, the Fantastic Four, The Endless, Conan, Savage Dragon and The Maxx on the next row. And too many more. Among the new kids, practically all of the Saga and The Wake casts. And yes, I have a soft spot for the Elephantmen, they feel like old friends by now.

7-What artists or writers are your biggest influences?
All of the original Marvel Bullpen, as I said before… I couldn’t get the Kirby and the Buscema out of my system if I tried. Frank Frazetta, Mike Mignola, Walt Simonson, Frank Cho, Adam Hughes, Joe Kubert, Kevin Nowlan (man, the THINGS he can do with ink should be illegal), John Byrne, George Perez, Travis Charest, Moebius, Juan Gimenez, Sparth, Ralph McQuarrie, Drew Struzan, Kyle Baker, Sam Kieth, Bernie Wrightson, Alan Moore, Warren Ellis, Stephen King, Harlan Ellison, Larry Niven, Neil Gaiman, Ray Bradbury… I can go on all day.

8-Who is the one character that you’ve always wished you could put your artistic touch on?
Hellboy and the BPRD. Spider-Man and Star Wars second. Believe it or not, from the moment I made my wish list some years ago, Hip Flask and the Elephantmen were actually my third choice, so getting here was a dream come true.

9-How long does it take for you to complete a project, issue, or cover?
It depends on the style, the project and the deadline. A cover can be done in a day, and on a good day (or a good combination of easy pages) I can pencil two or three pages, or color five or six. Then again, some double-spreads have taken the better part of a week. In one issue of Elephantmen there was a moonbase that I knew I needed to model in 3d to get right, and that took about eight days. But those are extraordinary cases. An average page (maybe I should point out here that I draw Elephantmen in clear-line, european style, leaving most of the textures, shadows and rendering for the coloring stage) takes about three to four hours to pencil without interruptions. The “without interruptions” requisite, or lack of is what makes everything fall apart. 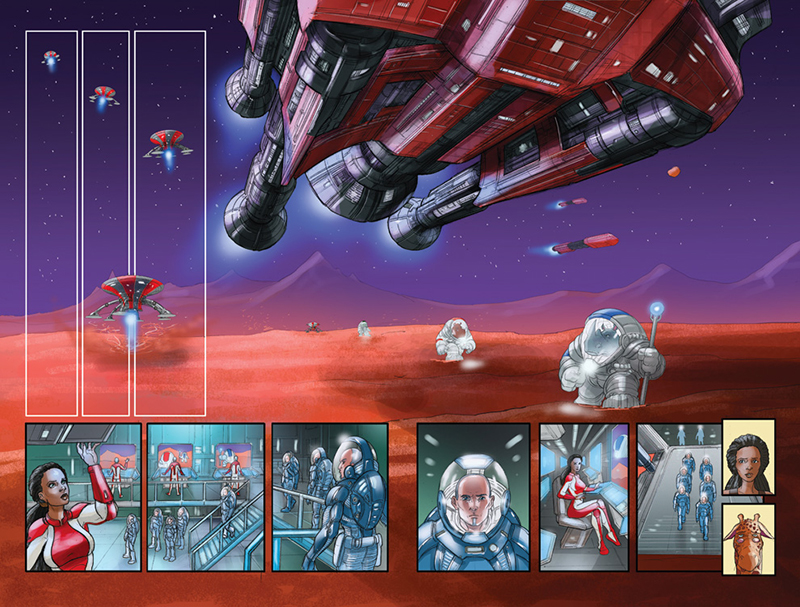 Normally I can complete an issue of Elephantmen (which I pencil, and color directly over the pencils) in five weeks. Hoax Hunters, another Image series which I pencilled, inked and colored in a less rendered style, allowed me to finish an issue in three or four weeks. But yes, under normal circumstances, a day from blank page to finished colored page is not too hard to get done.

10-What is your basic creative process for each project?
After reading the script, if possible, I do thumbnail sketches to send to the writer, among with any character or enviromental designs needed. I then incorporate his notes, get any necessary reference, put my playlist on the earphones or some comfort dvd (The Avengers, Star Trek and The Twilight Zone have kept me company for many pages), and just pencil the pages till they look complete enough to run through the writer again. Then its revisions and inks if needed, of sending then to the flatter to color afterwards. Pretty standard procedure, I guess.

11-Do you do most of your work traditionally, digitally, or a combination?
I’ve become decently proficient working on the Cintiq on the last two years or so, so it’s conceivable that I could do a fully digital page from start to finish, but most of the time I prefer drawing on the physical page first, and then scan it to color. Coloring is 100% digital.

Actually, despite all the practice I’ve had, drawing digitally still feels like a cerebral task, while pencils and brushes feel like a natural fit, I don’t have to think with those, just draw.

12-Have you ever met anyone you were star struck over?

The first one was when I met John Buscema at his last Comic-Con. I was so awestruck for meeting my all-time hero that I passed in front of Will Eisner without giving him a second glance! Big John was charming and funny, he seemed pleased when I told him that he was the main reason I became an artist. And after taking his picture, he told me the 50 cent charge he had mentioned was a joke, when already was gladly fishing for the coin!

The second time was my three-stage meeting with Guillermo del Toro. I was walking toward the SDCC panel when they were goint to talk about the first Hellboy movie, when I see GDT, Mike Mignola and Ron Perlman passing by my side. So I followed them. And I finished in the back of the hall, with them and half a dozen press guys, and I had no idea how I got there! And was too dumb to even say hi that time! Flashforward some years, I met him again at a signing, and while I did chat a bit, I had a lump in my throat and my voice was shaking. I went away almost in tears. A couple of years later, I was with the Elephantmen crew just casually waiting to be seated at a restaurant when Del Toro arrived out from nowhere. My wife and I had a great chat with him. Even exchanged parenthood tips.

And just this past Comic-Con I got to briefly meet Walt Simonson.

14-What does your workspace look like?
Nothing spectacular… there’s the overflowing drawing table (the same one I’ve had for more than twenty years), the work station, printer, scanner, inconveniently placed comics and dvd’s, and the reference books. I’ve had to add about six bookcases in the last two years. But, hey, I need them. Some Star Wars and Hellboy posters on the walls and lots of brushes and pens scattered around. Thanks to my daughter everything is spiced up with Frozen stickers.

15-What is the strangest thing that someone has asked you to draw?
Issue 59 of Elephantmen is filled with re-interpretations of the work of HR Giger, that was an intense work… I actually started feeling physically ill while going over some of the weirdest stuff. There was a mixed-parts monster in Hoax Hunters which was just too much fun to design. There are lots of fun requests at conventions, and some that I have to self-censor to keep it PG 13…

16-Do you have any upcoming projects or plans you can share with us?
I am juggling several fun creator owned ideas which I hope to get out there next year… but no jinxing them yet! Very likely I’ll start with a webcomic and we’ll see what happens.

17-Where can people find you and interact with you?

I have an art page at Facebook ( “Fan page” sounds too pretentious to me) at https://www.facebook.com/axel.medellin

On Twitter, I’m as @AxelMedellin
On both of them I post at least a daily sketch (today I’m posting # 1,143) and whatever news come by. My main art page is at Deviantart: http://axelmedellin.deviantart.com/

Besides that, I participate with several other artists in The Line it is Drawn, a weekly art/humor gallery at Comic book Resources http://goodcomics.comicbookresources.com/2011/08/12/the-line-it-is-drawn-archive/ 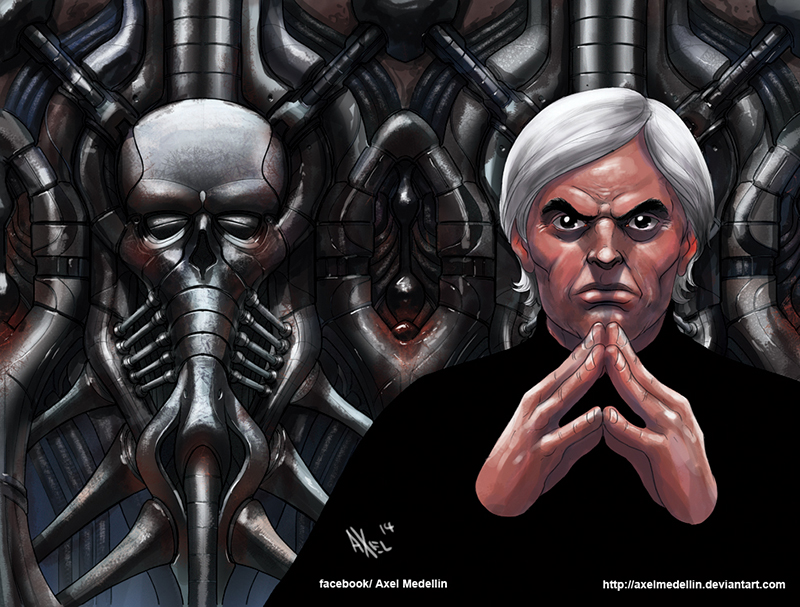