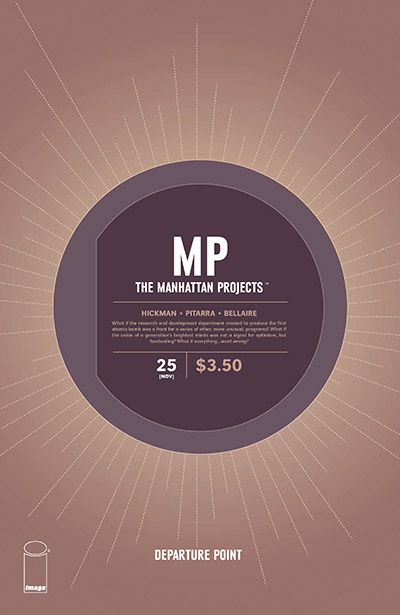 Anyone who knows me knows my fondness of Manhattan Projects. One dead giveaway may be the tattoo I have on my arm of one of the book’s characters. It’s also one of the two Hickman Image titles that I recommend to tradition comic fans and new readers alike. The premise is a sci-fi alternate history of the namesake, complete with exaggerated takes on the real life counterparts from history. With each issue, things have been an exploration of how crazy you can take a book.

Issue 25 isn’t for new readers, it picks up with the events right after JFK’s death, the two Einsteins with Feynman on a parallel planet, and the status of what the rest of the characters are up to. Hickman’s high-concept writing is some of my favorite and Pitarra’s crazy fun art brings levity, without dumbing down what could easily become a far fetched sci-fi tale. Their styles fuse quite well so that each character had their own distinct look and personality.

We also get an explanation for the future of the book. The series is an ongoing without a foreseeable ending, but there will be a short hiatus. Starting in March, there will be a “new” Manhattan Projects structure. It is something that the creators have been planning for a while and I can’t wait to see the new direction of the book. No amount of explaining can do the book justice, but now new readers have plenty of time to catch up during the short break.