We hope you had a great week and now it is time for you to enjoy Sebastian, Sheldon’s Top 5 from last week. Then take a listen to the Pick of The Week Podcast later today to hear more thoughts on each book that they picked! It is just that simple! So enjoy the books every week at your favorite community for comic news, reviews, podcast and more only here at Comic Impact! 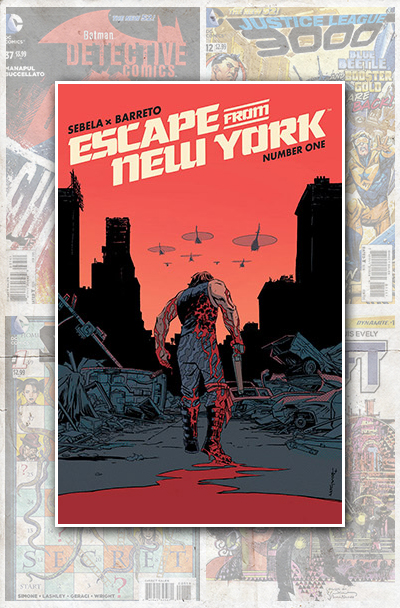 WHY WE LOVE IT: We can’t get enough John Carpenter! It means so much to us to have brought Big Trouble in Little China to comics the right way. The response has been so strong that we knew we had to bring another Carpenter classic to comics in a style and approach that does Escape from New York justice.

WHY YOU’LL LOVE IT: If you already love the Escape from New York film, this is a no-brainer. But if EFNY is new to you, writer Christopher Sebela has been garnering high praise for his recent BOOM! Studios original Dead Letters, as well as for his Eisner Award-nominated original, High Crimes.

WHAT IT’S ABOUT: The crime rate in the United States has risen 400 percent. After humiliating the President in front of the world and destroying America’s one chance to end World War III, Snake Plissken has become America’s Most Wanted man in a land of criminals and the insane. Everyone wants Snake dead. Luckily, Snake knows the feeling all too well. War hero. Outlaw. Renegade. Snake’s back!

Two words: Blue and Gold. Well, okay, three. Three words, the Blue and the Go…Wait, that’s four words. Okay, let’s try this. The team of Blue Beetle and Booster Gold are BACK! By Giffen and DeMatteis! Is the universe ready for either of them…? Are you?

Secret Six #1 – By Gail Simone and artwork by Ken Lashley

Gail Simone is back with the NEW 52 debut of the fan-favorite team – THE SECRET SIX! Six strangers are brought together under mysterious circumstances for an explosive first issue that will leave everyone asking, “What is the Secret?”

Shaft #1 – By David Walker and artwork by Bilquis Evely

Who’s the black private dick that’s a sex machine with all the chicks? Shaft! Created by author Ernest Tidyman, and made famous in a series of novels and films, iconic hero Shaft makes his comic book debut in an all-new adventure. He’s gone toe-to-toe with organized crime bosses, stood up to the cops, squared off against kidnappers, and foiled assassination attempts. But who was John Shaft before he became the hardboiled investigator with a reputation as big as New York City 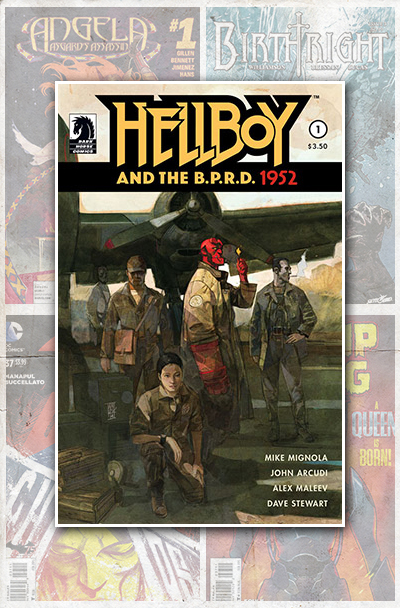 All her life, Angela — the finest warrior of Heven — was raised to hate Asgard with every fiber of her being.

• And now Angela knows the truth about her identity: She is Thor’s sister. She is an Asgardian.

• Cast out of her home and wanting nothing to do with Asgard, Angela must now strike out on her own!

• But what does Angela have that both Asgard and Heven want? And why are they so eager to get it?

• Visionary writers Kieron Gillen and Marguerite Bennett team with the legendary art team of Phil Jimenez and Stephanie Hans to finally throw the spotlight onto the Marvel Universe’s most dangerous inhabitant!

After a standoff in the police station, the Rhodes family is on the run from the law, and for their lives. And just what horrors did Mikey survive while he was away?

A bizarre series of murders and rumors of something worse lead Professor Bruttenholm to send a young Hellboy to a Brazilian village on his first mission. Hellboy and a small group of agents uncover something terrible in the shadows of a sixteenth-century Portuguese fortress

Swamp Thing #37 – By Charles Soule and artwork by Jesus Saiz

“The Machine Queen” part 3! Lines are drawn and strange allies are recruited as the Machine Queen assembles her army, while Anton Arcane and the Fungal Avatar take sides! Plus, Swamp Thing receives a dire visit from John Constantine!