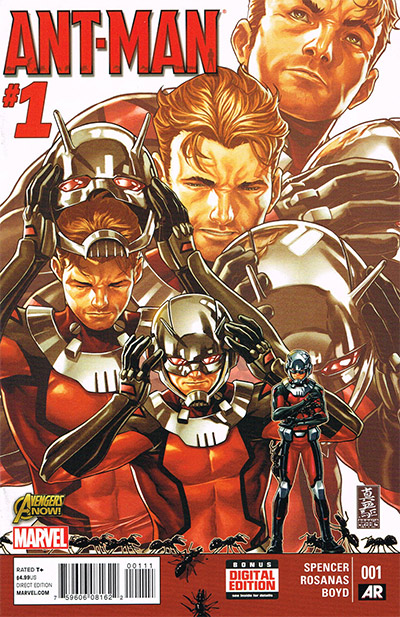 Ant-Man #1 launches, appropriately, in tandem with its MCU counterpart’s first trailer. This series focuses on Scott Lang and serves as a crash course for those who may not know much about Ant-Man, let alone this iteration or his origins. In the same business model which has been highly successful in the past (i.e. Guardians of the Galaxy), Marvel takes a gamble and puts one of it’s lower tier characters at the forefront to give the general public something fresh and exciting.

The premise of Ant-Man is Scott Lang’s strive for redemption and a fresh start. The ex-Avenger and ex-Fantastic Four member has a poor quality of living, no job, his ex-wife detests him, and he struggles to be a father, friend, and someone that his daughter can be proud of. The first character to hold the mantle was Hank Pym, who is loosely referenced, anecdotally, but does not really play a part. The issue had a bit of a rough start for me where Scott is awkwardly interviewing for a job with Stark Industries. I suppose that was the point, for you to feel his uneasiness along with him, but I had faith in Nick Spencer’s writing and things started getting interesting after the opening scene.

You get a glimpse into Scott’s history and failures through effectively illustrated panels by Ramon Rosanas with colors by Jordan Boyd. The story flows well from cover to cover and the contrast in a more muted tone for the flashbacks made the chronology easy to follow. Scott is put to the test more than once and regardless of his serious lack of judgement, the unequivocal thing about him: his daughter is his motivating force. I am a sucker for the Father/Daughter dynamic in stories, so I adored all the scenes with Scott and Cassie. Regardless of this being an introductory issue, there are things already set in motion by the end that will no doubt, play a bigger part towards the first arc. I trust in Nick Spencer and Marvel, but I was quite pleased with how enjoyable this first issue was, once you get past all the bad puns.