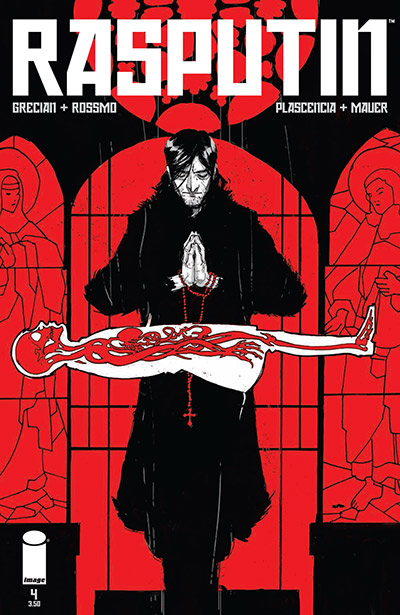 Rasputin #1 debuted a few months ago at the end of October, and I decided to pick it up based on my love for Riley Rossmo’s art alone. I have to say, I absolutely loved it since the first issue. The funny thing is, the story has revealed so little of the overall arc by the end of each issue that I felt I needed to give it a few issues before I could write a comprehensive review. Often times a monthly series with a slow boil can lose the interest of its readers, but amazingly, that is part of the appeal of this book. Now that we’re a few issues in there’s even more to love as the pieces are starting to come together.

The premise of this series deals with an alternate reality of history’s own Grigori Rasputin, a mystical faith healer, with more emphasis on the “mystical.” The first issue focuses on what may be his final meal amongst his five closest friends who have been conspiring against him and want him dead, as he knowingly drinks from a poisoned glass of wine. It is revealed, via a series of flashbacks, that Grigori has healing and resurrecting powers. After stumbling across a fight between his insufferable father and a bear, he decides to heal the bear and let his father bleed out. This sheds light on the eerie green figure who is always close behind him.

The second issue introduces us to French Soldier, Antoine Dulac, whom Rasputin befriends during a bar fight. Rasputin ventures out for the first time away from his home with Frenchman and into the unknown. Throughout this issue we’re able to learn that Rasputin tends to be very fearless, scrappy, and has nothing to lose. But when Antoine is standing on death’s doorstep, Rasputin once again steps in and makes use of his healing powers.

The third issue, strangely enough, deals with Rasputin wandering off naked into the Russian winter, encountering Spirits out of Russian folklore from whom he learns quite a bit about himself and his abilities. It sounds a bit strange, but it’s the first real look at the lore of this book as a whole. It adds insight and an inherent strangeness, aside from the obvious role of a supernatural comic book.

In the fourth and most recent issue, we start to understand why Rasputin’s friends want him dead. So far this story has been a telling of two stories; the first being the backstory of Rasputin, and the second being the present. The stories haven’t intersected, but there’s some sign of convergence in this issue. He must prove himself at the cost of hurting himself because the royalty won’t believe him, which goes a long way as to strengthening the character. It’s become quite clear that Rasputin is caring and considerate, an attribute which the royalty will most likely abuse. There’s a juxtaposition in this issue resulting from his helping the royalty which starts to play a part in the present timeline. We are left to bare witness while Rasputin is being threatened with murder on every panel.

No disrespect to Grecian, this story has been wonderfully told so far and he deserves his praise. But with so little being revealed every issue, the majority of the storytelling has really been driven by Riley Rossmo’s gorgeous art. The story has been told largely through silent sequences that set the atmosphere between past and present beautifully and effectively. The movement of the characters, the sequence of action, the nuances of emotion, all of it has been evocative and clear throughout. It’s been a different kind of read, but one that definitely gives you your money’s worth.