1-Who are you and what are you known for?
I’m Yanick Paquette, a wear glasses, love spicy food, talks with a thick French Canadian accent and enjoy Bach, among other things, but I’m mostly known for my work as an artist on Batman and Swamp Things nowadays. I’ve been doing comics for 20 years

2-Who do you currently represent and what are you working on?
I don’t know about represent, but I’ve been at DC comics for a while now and I’m illustrating a 120 pages Wonder Woman

3-How did you get into the world of comic art?
When I was maybe 10, I’ve found a copy of a John Byrne X-men in a trash can ( printed in black and white, in a horrible French translation and with a ripped cover ). I was used to more cartoony, funny European graphic novel and I could’nt help but to find all the drama of comics a lot more appealing.

4-Did you ever think as a kid that you would be working in the comics industry?
Not really. Following my childhood passion for collecting insects I’ve studied biologie. But actual entomologist aren’t Indiana jones type adventurer, roaming the jungles looking for un-described species as the kid I was hoped it would be. I also considered classical music for a while. I write contrapuntal string quartets. But who needs more fugues today. Yet trough all this, I kept drawing and do little comics for friends on the side. I eventually met a few fellow French Canadian comic artist at a Convention in Montreal, making this suddenly a viable, realistic option to make a living. I tried, it eventually worked. 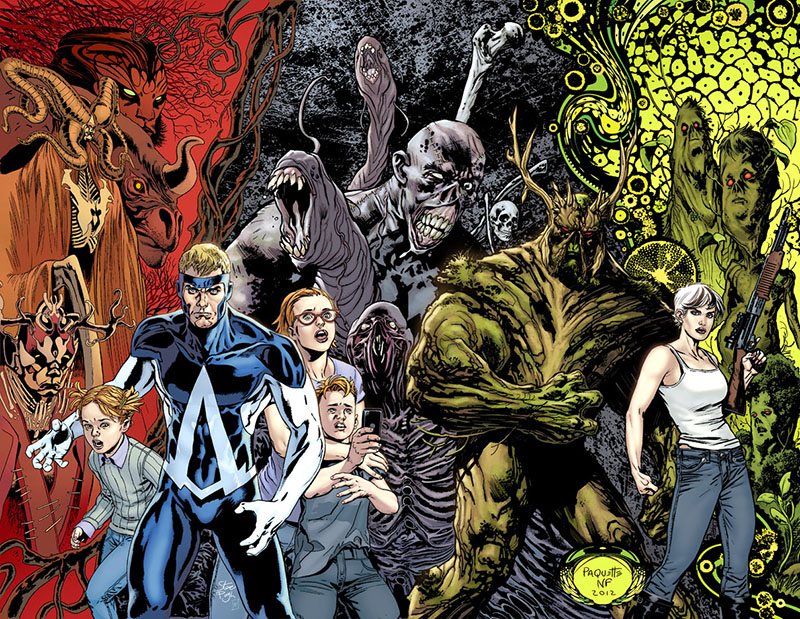 5-Do you read comics and if so, what are your favorite titles?
I read very little comic. Always enjoy Hellboy and whatever Adam Warren end up writing/drawing

6-Who is your favorite comic book character?
Amazingly, as a grown up, I have none. Don’t get me wrong, I love comics and I have nothing against the characters in them. But working in the industry made it obvious; corporation want you to love their intellectual propriety, because they can’t own individual talent, but in Truth, character themselves are worthless:  it’s the creators that gave them any value at a given time.  I loved the X-men in my teen, but fact I loved Claremont and the awsome talents this franchise got blessed with. I also read dreadfull X-men comics by others. So, I don’t care for characters, but I care and will follow creators

7-What artists or writers are your biggest influences?
It’s obvious I carry some Kevin Nowlan DNA. But my love of dramatic double light come from Bernie Wrightson and the classical B/W illustrator, Al Williamson, Foster, Raymond, the EC and the vampirella guys. But also, like most of my generation Jim lee, Adam Hughes, Mike Mignola and legion more.

8-Who is the one character that you’ve always wished you could put your artistic touch?
When at Marvel I wanted to get the hulk, but the timing wasn’t right. But, I ended up drawing some other giant green monster for DC after all;) I would mind some super weird Doctor Strange

9-How long does it take for you to complete a project, issue, or cover?
Back in the days of my monthly output I could turn in a book in 4 weeks, but I never felt satisfied with the result (and my lifestyle). These days I can afford being uncompromising with my artistic ambition and how much sleep time I wan, consequently, I’m Wwwaaaaayyyyy much slower. 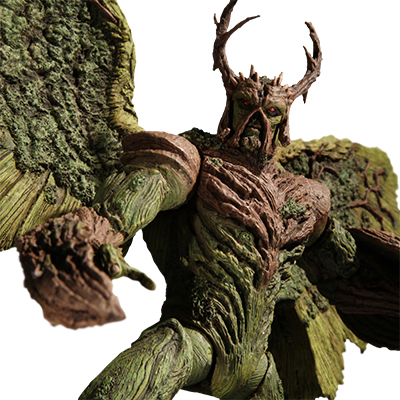 10-What is your basic creative process for each project?
Before drawing anything, with any new project, I’ll spend sometime thinking what I want affirm. Batman inc was about foreign culture, swamp thing about my own path into comics and my forbears legacy and WonderWoman is about sexuality and feminism and light. These big guide line will influence all my later stylistic and content choices. Like massively research location for Batman or nodding at the past swamp thing artist in my own version.

11-Do you do most of your work traditionally, digitally, or a combination?
It’s all digital now. No trees as been harm in the making of Swamp thing!

12-Have you ever met anyone you were star struck over?
I can’t be star struck it seems. Maybe if I meet Bach, which is unlikely.

13-Do you buy any toys, busts and etc. based on some of your work?
I don’t buy or collect toy. But DC sent me a few “winged” Swamp thing and i kept one for myself. It’s a awesome toy btw. I also end up designing a Wonder Woman Statue and she’s the only one throning in the my office.

14-What does your workspace look like?
Now that I’m digital it as been streamlined to a Cintiq, coffee cup, headphone and a few book piled beside it for inspiration

16-Do you have any upcoming projects or plans you can share with us?
As a lot of fans knows, I’m still working on my massive Wonder Woman earth One with Morrison. It’s taking for ever, but it’s worth the wait!!

17-Where can people find you and interact with you?
I’m easy to find on the net. On twitter , Facebook, DeviantArt and Instragram . There’s a proper website in construction.