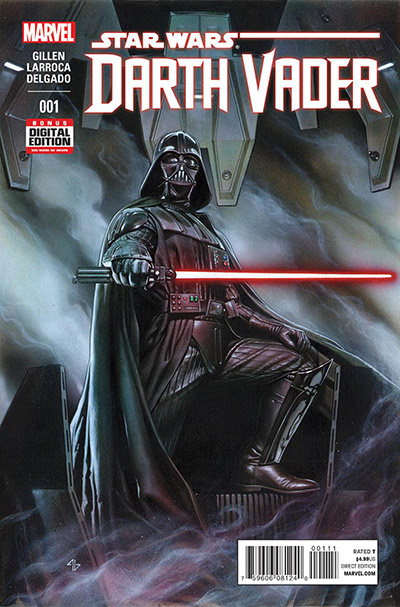 Marvel’s first Star Wars adventure in what will be a whole line of books set in the galaxy far, far away debuted last month to platinum sales and practically unanimous praise. Their second new series focuses on the well known and loved Dark Lord of the Sith himself, Darth Vader. It has already been said that Gillen and Aaron plotted a lot of their series together, and you can really see the overlap in the storytelling.

The story is set immediately after the events of A New Hope, just like the regular ongoing. Our tale opens with Vader on Tatooine where we have a confrontation with Jabba the Hutt. It is made clear that Vader is operating under his own accord to make use of the Hutt’s resources. The hardcore Star Wars fans should be able to figure out what exactly for pretty easily. The writing is tied to the events of Aaron’s Star Wars and gives us a glimpse of Vader’s repercussions following the destruction of the Death Star. It’s interesting to see how things played out after Vader is the only survivor of a grade-A screw up, letting the rebels get away with the Death Star plans. Basically, even though it wasn’t his fault, as the only survivor, Vader is the one left to incur the Emperor’s wrath.

So on to the important stuff. Is this new series worth adding to your pull list and is it a necessary companion to Star Wars proper? It was fun, decent start and where it is not often you get a series where your protagonist is unequivocally evil, definitely has the potential become something unique and exciting. Gillen’s writing has been hit or miss for me, but overall, I am a fan of his work. I had a little bit of trouble with the art, which I have had with Larroca’s art in the past. It comes across more like he took screen grabs for use as source material as opposed to using it for inspiration, turning it into something all his own. Aaron and Cassaday’s series feels like an unseen Star Wars movie, not borrowing heavily from any one source. This issue felt like unnecessary fan-service, i.e. the practically identical cantina scene, with a slightly different approach to it. All in all, if you’re open to buying more than one Star Wars book from Marvel, this series does a good job letting fans know that the franchise as a whole is in good hands back home with Marvel. I’m looking forward to seeing if they can continue the trend with the upcoming Princess Leia book.