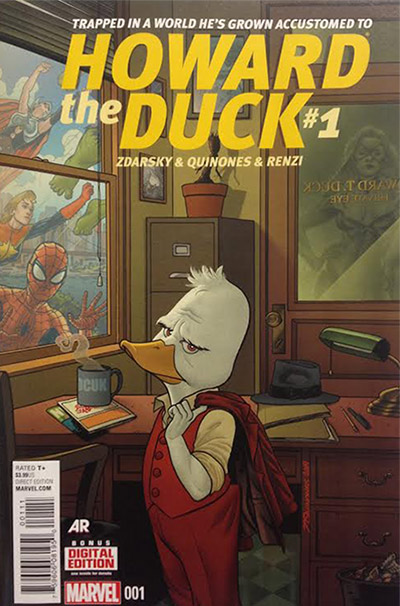 Howard the Duck has had an interesting history with Marvel comics. Created back in 1973, he got his first ongoing series in 1976, and was even given his own movie in 1986. With the success of Marvel’s delve into the cosmic universe with Guardians of the Galaxy, featuring an end-scene cameo of the feathered hero, they’ve given the character his own series again, this time under the guidance of writer Chip Zdarsky and artist Joe Quinones.

The first issue is rather interesting, Howard is a detective, struggling to make his next dollar. The first issue sees him attempting to retrieve an stolen item which has him dealing with She-Hulk, Spider-Man, and eventually Black Cat. The focus is Howard, his attitude, and his place in the world, which is still being figured out.

Joining Zdarsky is artist, Quinones, who adds a fun look to it all, and a nice match of tone and style. Overall, the first issue isn’t a bad one, but from what I understand, it’s similar to Deadpool and Superior Foes of Spider-Man, so that may be why it falls a bit flat to me, but may be someone else’s cup of tea. I’m willing to give it a few more issues, possibly the first trade to see how it pans out. While it’s an entertaining throwaway read, it’s also not quite the superstar debut of the next big thing.