Review: The Manhattan Projects: The Sun Beyond The Stars #1 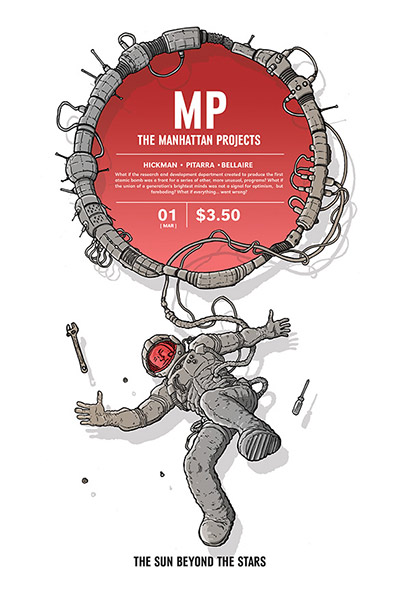 I have been hooked on this book from day one with the introduction to an alternate history version of my favorite Father of the A-Bomb. The series as a whole deals loosely around a lot of historical figures from the WWII era, namely those involved in or around The Manhattan Project, albeit a bit twisted. During this series’ previous run, we saw Robert Oppenheimer defeat his cannibalistic twin brother, Joseph, in a color-coded mental civil war, a pan-dimensional evil doppelgänger Einstein, a traitorous alien Enrico Fermi, and a cult-leading Truman, conducting ritualistic murder sex.

While this book may follow the same premise as the three previous volumes, this relaunch is completely independent and you can dive right in without prior knowledge. The Sun Beyond the Stars picks up with the ongoing misadventure of cosmonaut, Yuri Gagarin, who in real life was the first human to ever enter space, in a subplot that sees him traversing space in search of his dog, the equally-historic Laika. In the process, we are taken to a space court, which quickly descends into a comedy of errors before crashing in an impactful reunion, which should be interesting to see play out.

Pittara is a crazy, bonkers, creative guy; and his art is cartoonish, complete with tiny humorous background details, but the art doesn’t go overboard, which is an easy line to cross. Each character has a distinct feel and emotion to them, their expressions are easy to read. When it comes to reading Jonathan Hickman, you best prepare yourself mentally. His concepts are regularly high concept and demand perhaps more academic reading. But this book is equal parts fun, headiness, and WTF. There are a lot of science fiction books on the shelves these days, but no one does it quite like Hickman.