Along with the panels and special guests, a big part of the fun of any big comic book convention is the fans. Many attendees travel from all over the globe to visit these conventions to express their passions, meet people from all over with similar interests, and dressing up as their favorite characters. 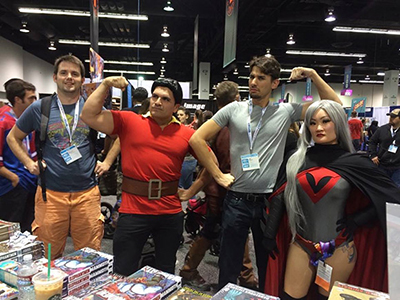 The annually-held WonderCon kick off down in Anaheim, California, seemed a little light on the floor this Easter weekend, but that didn’t stop the many fans who came dressed up as someone from their favorite movie, television show, or comic book from all the photographers and photoshoots taking place outside of the con doors. I spent most of my time indoors, but I was still able to snap pics of some of the great costumes.

The planned construction to the Anaheim Convention Center and its expansion, breaks ground in October. No word on dates yet, though unofficially, Easter weekend is likely again, which would place the convention at March 25-27, 2016. This won’t be the first move for the convention, which was previously held in Oakland from 1987-2002, San Francisco from 2003-2011, and then to Anaheim, where its been through this year. Comic-Con International also revealed that they’ve only signed a one-year contract with LA, so it’s possible the convention could move again in 2017. Regarding the announcement, Los Angeles Mayor Eric Garcetti said:

“Los Angeles is honored to have been selected as the destination for WonderCon 2016. We look forward to establishing a long-term partnership with Comic-Con International, the presenter, and helping them establish a home-base in L.A. We anticipate the show to be highly attended and to set the precedent for future successful Comic-Con events in L.A.”

Next year’s WonderCon is projected to bring over $32 million USD into Los Angeles’ economy.The City of Los Angeles has also been eyeing San Diego Comic-Con for some time, reportedly bidding to bring the convention to L.A. as recently as January. According to Deadline’s sources, the city is still being considered for Comic-Con, which generated an estimated $180 million USD for San Diego last year, should the convention be relocated.

Comic Impact will post more as we find out additional details.

What do you think about WonderCon’s move to Los Angeles? Let us know in the comments.