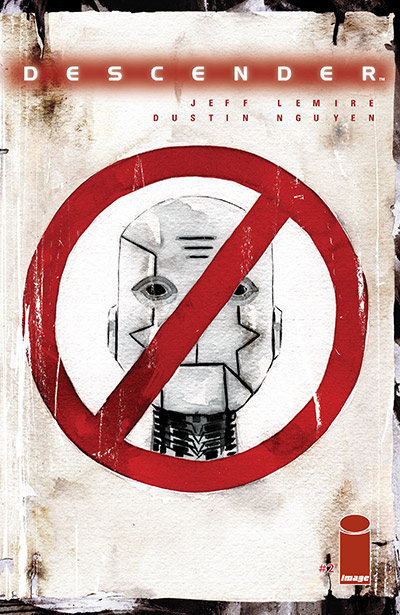 Jeff Lemire launched this sci-fi adventure last month with Image Comics, in what is a strong introduction to a galaxy that lays out the geography and politics for an entirely new and fascinating world that’s teetering on the brink of disaster. Moon-sized robots, called Harvesters, appear in the sky of one of the core planets of the United Galactic Council, causing billions to panic. When they disappear, their worlds get turned upside down. AI is criminalized, and robots everywhere are hunted down to prevent the tragedy ever again. At the center of it all is the abandoned child companion, Tim-21, pulling along his robot dog, Bandit, as we begin to learn what exactly these two have to do with everything.

Descender #2 picks up exactly where the last issue left off with a gang of Robot Hunters closing in on the child like Tim-21. This issue is brilliantly paced, as the narrative switches between the present day, and the past when Dr. Quon creates and programs Tim-21. The flashback scenes serve as a way to get to know Tim-21 before the disaster on his moon. We get insight as to why he was created and his normal day-to-day routines, but most importantly, Tim-21’s assimilation to human life once he’s introduced to his family on the colony. Tim-21 knows that he’s an android, but he’s also aware that his primary function is to bond with his assigned child on the colony. There’s even a scene where Tim-21 calls Ms. Tavers, “Mommy,” and tells her that he hopes to dream, a quality specific to sentient creatures. The creative team manages to humanize a character, who by design, should have no humanity. It’s a slow burn so far, but so well-crafted, I’m intrigued to see where the story is going, especially given how this issue ends.

Lemire proves he is perfectly suited for the sci-fi genre, as he did with the acclaimed Trillium, and this tale of a lonely robot boy is certainly no exception. But in contrast to Trillium where he took on both writing and art duties, his pairing with Dustin Nguyen was the perfect choice. The two just seem so in sync. A large part of the emotional success of the book is due to artist, Dustin Nguyen, whose familiar watercolor finishes lend a stunning wash to the entire world of Descender and its occupants. The color palette shifts from primaries to dusty reds and blues as danger unfolds, giving us exquisite detail. Nguyen is going all out on this book, from start to finish. If you’ve been a fan of Lemire and Nguyen’s work, this showcases their storytelling talents perfectly. And if you haven’t had the pleasure yet, this is the place to start.