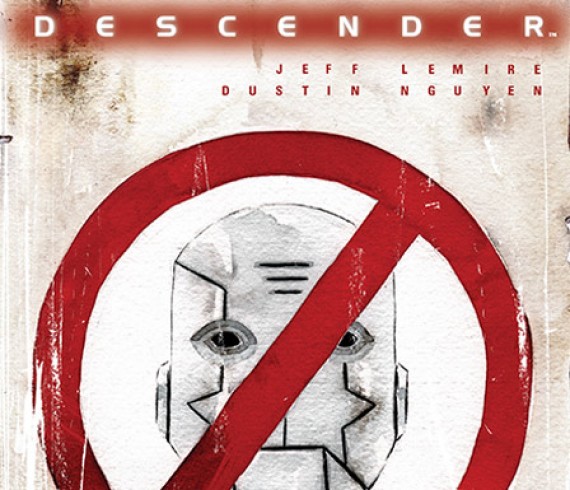 by bucky· April 13, 2015· in Reviews· 0 comments tags: Descender, Dustin Nguyen, Image Comics, Jeff Lemire
Jeff Lemire launched this sci-fi adventure last month with Image Comics, in what is a strong introduction to a galaxy that lays out the geography and politics for an entirely new and fascinating world that’s teetering on the brink of disaster. Moon-sized robots, called Harvesters, appear in the sky of one of the core planets of the United Galactic Council, causing billions to panic. When they disappear, their worlds get turned upside down. AI is criminalized, and robots everywhere are hunted down to prevent the tragedy ever again. At the center of it all is the abandoned child companion, Tim-21, pulling along his robot dog, Bandit, as we begin to learn what exactly these two have to do with everything. Read More

by bucky· March 11, 2015· in Pick of the Week, Podcast, Reviews· 0 comments tags: Descender, Dustin Nguyen, Image Comics, Jeff Lemire
I love the smell of new comics on Wednesday–it smells like The Pick of the Week! This week Sebastian had the pick, and he went with Descender from Image Comics by Jeff Lemire and Dustin Nguyen. Something’s missing though, something’s not exactly right. Read More